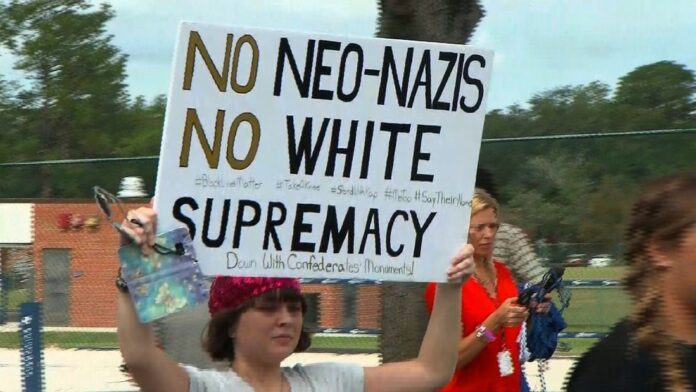 Guess you all will agree with me that “racism” has become [the] absolute most fashionable argument for most all political statements of our Socialist, Marxist, Communist culture. We all know that White Supremacy, Neo-Nazism, and Fascism all thrive, presumably, in some form of ultra-far-right ideology which promotes hatred and attacks on ethnic minorities – in today’s context, however, that minority status almost exclusively reserved for “blacks.”

While it is true that all these ideologies, in fact, endorse oppression of minorities, be it black or otherwise any other ethnic minority, what is not true is what democrats and their Party would want us to believe, to wit, that all whites in mainstream America are supremacists, Neo-Nazis and/or Fascists, per say. Nowadays, case you have not noticed, whatever you say, whatever you do, your beliefs, your actions, your idiosyncrasy they all better be in sync and in complete agreement with the Democrats’ radical Left views, cause if they are not, you will be immediately branded as a “white supremacist” – that is, of course if you happen to be white. Vis-à-vis, if you happen to be black then you would be permanently chastised as an “Uncle Tom”, a deserter – or a traitor to the “Cause.”

Now, regarding this prevalent culture of racism, while many may wonder how it all came about, how it all happened, I do not pretend to have all the answers, however, I do have a theory which I think kind of explains it all. Here is how I think it all began. My starting point is that this “racism” deal here in the U.S., had its origins with Karl Marx and his Marxist / Communist creed. In his Manifesto, Marx explains the history of civilized societies in terms of a war of the classes.

Marx’s Manifesto was originally published in 1848, and, while in his original work Marx focuses on a war between capitalists (the bourgeoisie) and the wage-workers (the proletariat), with time Communism evolved to include many other social disparities, to wit,  racial and ethnic inequalities which have now taken a center-stage role in all Communist-driven agendas.

In modern-day Communism the original labels of bourgeoisie and proletariat are readily interchangeable with the “white” and “black” labels. In the end, all the same – all about fomenting chaos between the classes, between the races. That being the case, the fact that the United States of America had a history of black slavery, of Civil and Human Rights controversies and violations right up to the 1960’s, made our country an idyllic target for a Communist takeover, so professed by Marx himself back in the day, and by many others throughout history.

In other words, as far as I am concerned, the prevalent 1960’s culture of segregation and black oppression in the U.S. back in the day paved the way for a Civil Rights liberation revolution of blacks in America, as well as also paved the way for Communism entry level – both feeding off each other. So, again, as far as I am concerned, Communism and the Civil Rights movement in the U.S. ran parallel– each feeding off each other.

In hindsight we can now surmise that both the Civil Rights and Communism in the U.S. both succeeded. Matter of fact, a quick fast-forward will kind of confirm all that I am talking about. Stop and think for a minute. As far as the black movement was concerned, we went as far as electing the first black President – talk about equality. Matter of fact also, the pendulum swung so much the other way, we even went into a “reverse racism” mode to where blacks where emboldened enough to even distance themselves from Americanism with a ravished heritage revival under the label of African Americans. All the while as the guilt of ‘whites’ based on a history of oppression became a counter-culture characterized by submissiveness and permissiveness, allowing for radical black leaders, institutions, and/ or organizations such as “Black Lives Matter” to become paradoxically arrogant, insubordinate, rebellious and defiant, albeit at times capable of intimidating whites to where the latter remained quietly accepting of ludicrous acts of violence and insurrection all throughout the nation.

Make a long story short folks, like I said earlier, there has been a radical black movement in America, which, together with a white Marxist coalition, composed of guilty weak and Communist whites all joined-ventured to promote and benefit from each other’s resurgence in implementing that fundamental transformation hailed by the first black Communist President of the United States of America – the Manchurian Candidate Barack Obama. The rest is history.

As the issue of “racism” proved to be sort of a blessing-in-disguise for some blacks and Communists in America, in the new Biden Communist administration the matter of racism has reached a new plateau; an even more important role than ever before – a life of its own even. Ironically, whereas nowadays Communist whites are [the] principal promoters of racism, there are, as well, a great number of good black people in America, who are past the racist card stage; past being used by Communists as useful tools in their evil agenda. In fact, there is a great number of good black Americans who have come upon the realization that they have been used by the Communists all along in their evil campaign of taking over the country.

Ironically also, as Communism is now out-of-the-closet and, as we now have a Communist administration, the Junta’s head, our clown President, Joe Biden himself, is one of the principal promoters of racism. Notably, since taking office, Biden has time and again, alluded to the infamous “Jim Crow” syndrome – the latter referring to laws enacted in the late 19th and early 20th centuries by white Southern Democrats; laws that enforced racial segregation in the Southern United States, based on Thomas Rice’s theater folk trickster persona character of Jim Crow – a racist depiction of African Americans and their culture.

Bottom line friends, followers, like I said earlier in the narrative, racism, per say, has become a widely used popular political instrument that serves but to endorse, promote, and/or encourage the much-needed class and social rifts as first promoted by Communism’s creator Karl Marx. Again, nowadays if you are an anti- Radical Left, an anti-Socialist, anti-Democrat or anti-Communist, you are immediately labeled as a “White Supremacist”, so…please folks, friend, next time a democrat calls you a White Supremacist, a Neo-Nazi, or a Fascist, do not hate them or resent them for it – all the contrary, thank them for it. Guess what, if being an anti-communist makes me a “White Supremacist”, then, so be it. I am a proud White Supremacist – hope you are too. God save us and God save the United States of America.