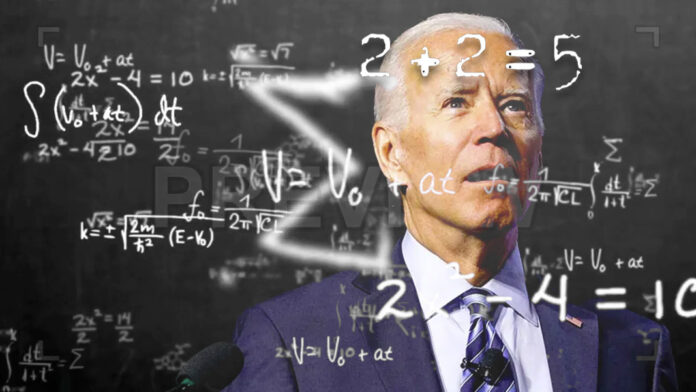 Pathological lying, also known as mythomania and pseudologia fantastica, is a mental disorder in which the person habitually or compulsively lies. It was first described in the medical literature in 1895 by Anton Delbrück. Although it is a controversial topic, pathological lying has been defined as “falsification entirely disproportionate to any discernible end in view, may be extensive and very complicated, and may manifest over a period of years or even a lifetime”.

It is a well-known fact, that Joe Biden has a long history of plagiarism, and making up stories proven not to be true. This behavior is confirmed by all, including his closest friends and supporters.

Unfortunately, though expected, this pathology has continued in his presidency. In the last few days, and faced with a much-unresolved crisis of his own making, he gave a couple of speeches to the Nation that were more than distortions of facts, but whoppers!

First, he took credit for the economic recovery. Before the COVID pandemic, our Nation’s finances were as good as or better than ever. The slow and modest present recovery is exclusively a result of the decreasing illness and the return to the workplace of some of the ones forced to stay home. His statement that he is “creating” jobs and thus responsible for the improving economic indices is a blatant lie. Only when these markers exceed the pre-pandemic ones it would be his doing. Let us look at the truth: Only when the # of workers are more than 152M, rate of unemployed less than 3.5%, and inflation rate less than 2.3% can the recovery be called Biden’s creation.

And what about “black lives matter”? obviously employed blacks have a better life, correct? During Trump’s first three years in office, median household incomes grew, inequality diminished, and the poverty rate among black people fell below 20% for the first time in post-World War II records. The unemployment rate among black people went under 6% for the first time in records going back to 1972.

But our fearless, though cognitive diminished, leader does not stop there in his self praising attempt! With a straight face he claims as an achievement the fact that only 1% of citizens were vaccinated before he took office, and now there are more than 20%. The fact that when he took over the vaccines had just been approved, but the daily rate was already the same as what he had promised was ignored. Do we also believe a statement that the first driver of a car out of the factory was responsible for its moving? This silly example was made so the likes of CNN’s John Lemon and viewers would get the point!!!

But it only took a day for him to claim the most incredible interpretation of what excessive government spending does. Looking at the TV without blinking he said that it was a great time for the country to spend and borrow as interest rates were 0%.

Will someone inform him when he is riding his Peloton and eating his favorite ice cream, that the Federal Reserve paper printed dollars are not a loan for the simple fact that there is no ability to pay back? There are intended for sale, with China as the main buyer, in order to pay for the debt and deficit created. Can he be made to understand what simple math is? The only way for this worthless paper to be sold is by paying the attracted party a promise for a gain called “interest”.

So, Mr. President the more you spend what you do not have, the more interests will rise causing a reaction named “inflation”, that prices for everything that “we the people” buy will increase, that as salaries have to increase, and in order to survive the producers of capital will reduce employees, make less money, pay fewer taxes, generating a spiraling crisis called “deflation”. For the Lemons of this World, it means higher prices, fewer jobs! But Mr. President, for you to comprehend, 2 plus 2 is 4, not 5!