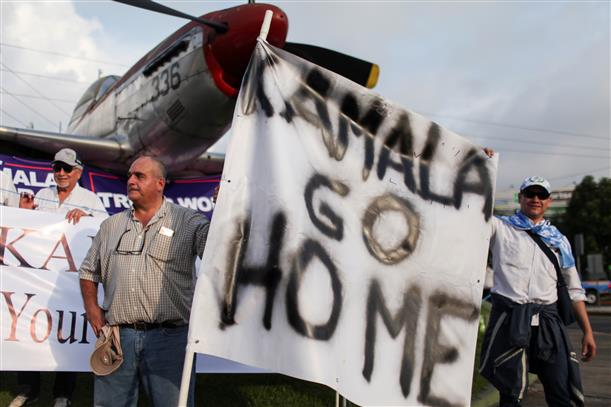 As well we all know, our esteemed Vice-President Kamala Harris, is now back from her trip to Guatemala and Mexico – a trip, mind you, which must be the ultimate practical joke on “we-the-people” – a true mockery on the American people. When I first heard the administration’s official reason for Harris’ tour, namely, to address the “root causes” of the heightened migration from Central America, I just broke into laughter – it was just that funny. Matter of fact, I thought it would make a great line for a Saturday Night Live sketch.

So…the “root causes for a heightened migration,” really, serious? Is this an insult to our intelligence, or is it? The root causes of the border crisis – are you kidding me? I am to the point where I really believe that all in the Biden kingdom are just incapable of discerning between right and wrong, between good and evil, between truth and lies – worse maybe, they must believe we all are, you, and I, just that stupid, or so they think.

But…before I go any further, however, let me preface my comments with a disclaimer about the way I feel about this Kamala Harris woman. That is, I find the woman to be one of [the] most despicable, disgraceful, and contemptible people in our political arena. I have a great dislike for many other democrats in our political playing field, but boy, I got to tell you friends, this laughing hyena Harris, takes the prize, hands down.

On March 24th of this year, the Biden clown appointed Kamala Harris to lead the efforts on stemming migration on the southern border. As of this writing, since her crowning as border-czar, it has been 77 days that Harris has not even visited the border – an outright insult to the American people. To add insult to injury, Harris’ is now chalking the border crisis to guess what? Yes folks, to climate change of all things. Can you believe that one? Then again, in our new Socialist United States, all that is wrong, has its root cause on either “white supremacy” and/or “climate change.”

In other words, Harris’ tour outright dismisses, sets aside, and disposes of any notions that the surge in the border migration crisis had anything to do with Joe Biden and/or Biden’s administration. In other words, it is not like Joe Biden campaigned on an open border policy, right? It is not as Joe Biden has not outright enticed for all to come in illegally with the promise that they would all be received with open arms. It is not like Biden, from his first day in office, quashed Trump’s Migrant Protection Protocols, a/k/a the “Remain in Mexico” initiative; it is not as Biden did not order to stop building Trump’s border wall; it is not as Biden ridiculed ICE emboldening a “catch and release” policy, where illegals, including but not limited to gang members, rapists, murderers and drug dealers are swiftly released into the mainstream of our cities; it is now like under Joe Biden’s administration illegal crossings of the border are up nearly 1000% compared to Donald Trump; it is not like in April alone over 175,000 illegal aliens crossed the border and were released.

No folks, it was not Joe Biden’s immigration policies that caused the border crisis, no, it was climate change, and it was the fault of the so called “Northern Triangle” of Central America – a term used to refer collectively to the three Central American countries of Guatemala, Honduras and El Salvador as the ultimate culprits for the border crisis.

Point being in a quintessential communist tactic, Biden, Harris and company are swiftly trying to divert the blame for their out-of-control migration crisis to anything and everything other than taking responsibility on what has become a true threat to our national security. That, friends, may explain the reason why our esteemed Vice-President, has not bothered visiting the border; the reason why when asked the question on why she had not visited the border, the hyena, resorted to laughing, as she always does, while answering that “she had not been to Europe either.” Is she a sarcastic witch, or is she?

By the way friends, speaking of sarcasm as it pertains to this border-crisis situation, what about our own Cuban American spiteful version of hypocrisy? What about this hypocritical, Homeland Security Secretary Alejandro Mayorkas, who, time and time again claims “there is no border crisis.” Really? It is evident to me that Alejandro, took a page or two from Fidel Castro’s bible of deception. You are right Alejandro, there is no crisis at the border, sir, just the same as Castro and his Revolution were the best thing that ever happened to Cuba, right?

Bottom line to this phony Harris’ public relations drama tour is that the Joe Biden administration’s ticket to solving the problem is, doing what the clown does best, spend more of our taxpayers money. How about a $4 billion-dollar aid plan for the Northern Triangle governments? Why not? It was them [the Northern Triangle] who started it all, right? And it is not like all the money that we send to these countries, ends up in the pocketbooks of these Banana Republic’s corrupt presidents, right? It is not like the United States has forever subsidized all these third-world Republics in the hope of gaining their admiration, alliance and respect, whereas, in the end, they end-up hating our guts.

So, let’s see now, the cure to the imminent border crisis, is to give the Northern Triangle more money so that they can alleviate the climate change problems, the hurricanes, now causing people to leave for the United States, really?

Look folks, I could go on and on, but I do not think I need to, do I? You get the picture here, do you not? Yep…it is all about deception; it is all about lying; it is all about mastering the art of manipulating public opinion to where you and I are re-programmed into believing whatever they want us to believe. It is about dehumanizing people, about taking God out of the equation, and taking our guns away so that we cannot fight them when the time comes; it is about making us believe that “Whites” in mainstream America are the reason for all evils; it is about the world ending soon because of climate change.

The good thing folks, however, is that we will not have a border crisis anymore. We only have a “challenge” at the border and, thank God, we have a border czar, who has solved the challenge, not by visiting the border, but with a two-day tour with our friendly neighbors south of the border, anxiously waiting for the billions of our taxpayers dollars which will undoubtedly stop all illegal immigration dead on its tracks.

Again, thank God as Vice-President Harris, did find the root-cause of our migration “challenge.” Folks, yes, we all can consider ourselves lucky to have a Kamala Harris as our Vice-President as only her, and/or someone like her could solve all our immigration problems with a two-day tour of Guatemala and Mexico – a true blessing in disguise.May God save us and may God save the United States of America.