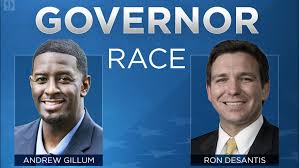 I think you will agree we me in that the forthcoming Mid-Term elections are probably one of the most important elections in our lifetime, bar none. The reason is simple – these elections are, no more no less than a referendum on more of the ‘same-old’, ‘same-old’ vs. Trump’s ‘making America great again’ – that simple!

Now, I say that if you live in Florida like I do, independently of what is going at the national level, we here in Florida got our hands full regadless. I am referring to the gubernatorial race between republican candidate Ron DeSantis and democrat Andrew Gillum.

I am going to try and be as succinct as I possibly can with what is at stake. Its elementary really, a vote for Andrew Gillum is a vote for us to become a Marxist state. A vote for DeSantis is a vote for capitalism and democracy. Matter of fact, if you really think about it, we have come to a unique new chapter in political history – our choices in any and all elections come down to either you are voting for candidates in a re-invented progressive, marxist democratic party or you are voting for a conservative, constitutionalist republican party – that’s it. The times of “moderate” democrats are over – they are passe, obsolete, bygone.

Back to our darling candidate Gillum. Beware, this guy follows in the image of Barack Obama. As well as Obama did, Gillum engergizes the democrat’s base. He is black and has a charismatic presence as well as soaring rhetorical skills – that’s about it. Other than that, this guy is your quintessential liberal democrat. Gillum is an unabashed champion for Medicare-for-all-single payer health system, just like democratic loony toon queen Alexandria Ocasio-Cortez up in N.Y.

Among other things, Gillum is a Trump-hater, who says, if elected, he will try to impeach Trump; he is for gun-control; the abolishment of ICE [Immigration and Customs Enforcment] agency; he condems Israel; wants 1 billion dollars in new taxes for Florida – just to name a few.

As a Mayor of Tallahassee, Gillum has been allegedly accused of government corruption while there is currently an FBI investigation looking into his possible wrong-doing and participation in the corrpuption scheme. Make a long story short, this guy friends is bad news, and I mean really bad new. Even if we win both houses in the national elections, if this Gillum guy is elected as the next Florida governor – our great state is in for some radical changes, morevoer, it would be quite a permutation from all the good things we enjoyed under governor Rick Scott.

As we speak, Gillum is leading the polls by as many as 9 points. Scary! As much as I don’t really believe some of these polls, as much as I know we just cannot take anything for granted. Point being, I am urging all voters to get off your butts and your recliners and go out an vote – a vote for Gillum is a vote for the Clinton, Polosi, Schumer, and all the gang of Marxist progressives who are ruining this country.

National polls are showing that DeSantis backers are mostly men and hispanics while Gillum’s are women and black. For the sake of our state, I urge all voters to cross demographic lines and do not vote for this Gillum. I specially urge all black voters out there to go out on voting day and do a “Kanje West” liberation move. Put on your MAGA hats and vote for DeSantis. You will be glad you did.

Well friends, there is little else I need to say as I consider all of you in my reading audience intellectually qualified to know what is good for us or what isn’t. I pray that we win our guberantorial race as much as I am terrified of Gillum’s Marxist platform and hope you are too. May God save us.