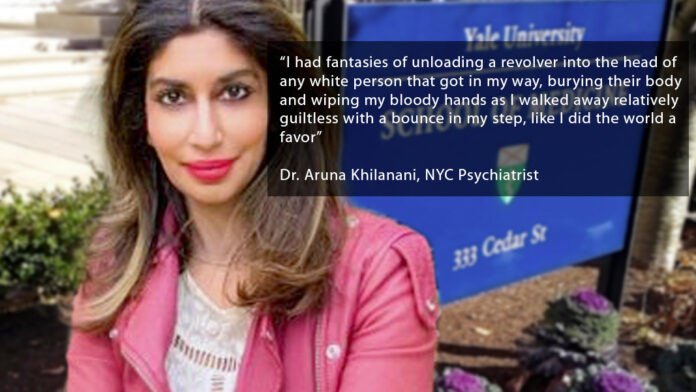 “I had fantasies of unloading a revolver into the head of any white person that got in my way, burying their body and wiping my bloody hands as I walked away relatively guiltless with a bounce in my step, like I did the world a favor,” she said, adding an expletive. Later in the lecture, Dr. Khilanani, who said she is of Indian descent, described the futility of trying to talk directly to white people about race, calling it a “waste of our breath.” “We are asking a demented, violent predator who thinks that they are a saint or a superhero to accept responsibility,” she said. “It ain’t going to happen. They have five holes in their brain.

When I write about anything related to my profession, I always clarify that I am doing it as a layman. It is part of our ethics to avoid giving a professional opinion on someone that we have not thoroughly examined. Regardless of that caveat, I am forced to opine on the contents of a lecture given by someone that practices my medical specialty. I have had in my 30 years of Psychiatry, clinical, academic, and administrative experience.

Suffice it to say that I was able to navigate and succeed in the bureaucratic oceans that faced me in every endeavor. So based on my experience, I am more than qualified to render an opinion on Dr. Khilanani’s rant delivered as a lecture at Yale University.

Regardless of our titles, we are all human beings and should be judged by equal parameters. The first step, in order to protect others, she should immediately have her license removed by the issuing State(s), and expelled from the American Psychiatry Society, plus any others she might belong to.

Her “fantasy” of murdering “whites” is based, she claimed, because they are “demented, violent predators”. Treating and helping persons that suffer precisely these maladies is why Psychiatry exists. Not to expand in our MD’s oath of “do no harm”.

Second step she should be taken, by force if necessary, to be examined by a Mental Health professional as she has signs of being a “threat to herself and others”. Just imagine the uproar if, after a mass murder, the perpetrator’s family had said that he/she had “fantasies about committing this act”. What should this case be different?

After the examination, a Judge will decide if she has or not a mental illness or should be treated as any other potential risk. Does she know right from wrong, or does she have illnesses that caused an “irresistible force”, are the generally accepted basis for that judgment? Her defense of being taken out of context is as incoherent as her lecture.

Time will tell, but in our present society, it will not surprise me if she is given a pass! After all, it has been a common and repeated mantra that all that is wrong with our country, real or imagined, has been caused by humans born with white-colored skin!