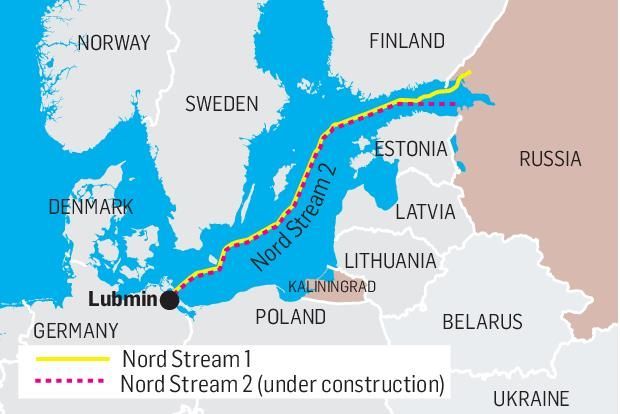 As well we know, our clown President Joe Biden, just returned from his first eight-days international circus trip where he met with G7 leaders in the UK, with NATO leaders in Brussels and then his much publicized “Summit” with Russian President Vladimir Putin in Geneva, Switzerland. As expected, the imbecile’s performance abroad makes his domestic blunders pale in comparison. If we all thought it was bad here on the domestic front, last week, he proved us all wrong. In his international arena’s first appearance, the idiot proved to the world that, in addition to being stupid, he is a wimp, a complete weakling, and full-time coward, among others.

My narrative today, however, is not about Biden’s trip, per se, instead, it focuses on Biden’s waiving the sanctions levied by Donald Trump against the infamous Russian Gas Pipeline – a truly relevant subject-matter as it relates to this week’s pinnacle “summit” extravaganza with his counterpart KGB agent, career criminal, Russian President Vladimir Putin.

So, one of President Donald Trump’s first initiatives, immediately after taking the office of President, was the signing of an executive order advancing the Keystone Pipeline – a line meant to transport millions of barrels of oil between Alberta, Canada into our Midwest refineries here in the U.S. Meantime, Joe Biden wasted no time as, he too, reversed Trump’s decision and revoked Keystone on his very first day in office. By revoking the permit, Biden destroyed 11,000 jobs and roughly $2 billion dollars in wages. Biden’s alleged reasons for halting the Keystone Pipeline were all centered around “climate change” – the pipeline’s, presumed contribution to carbon pollution in the ongoing political debate over fossil fuels.

So, here is the first irony folks, on Tuesday May 20th, 2021, a meager 27 days before his summit meeting with Vladimir Putin, despite opposition from his State Department officials, Joe Biden waived Trump’s sanctions on Russia’s Nord Stream 2 gas pipeline. So…let us see here, first, Biden had no problem giving the pink-slip to 11,000 Americans, but then, turns around and gives Russia a free pass on their pipeline. Gather that Russia’s pipeline does not pollute the air like ours does, does it? By the way and just for the record folks, in an 11-volume State Department report on the Keystone XL pipeline in 2014, the report concludes that the pipeline would not significantly contribute to carbon pollution as alleged by Biden.

But…that is not even it folks, forget about the “pollution” and the climate change fallacy. Let us consider other repercussions ensuing from waiving of the sanctions. O.K., so, for one, what is the Nord Stream 2 pipeline and how will the uplifting of the sanctions affect the United States of America, if any? So, in the most abridged possible manner I can think off, the Nord Stream 2 gas pipeline is the second of its kind, a system of offshore natural gas running under the Baltic Sea from Russia to Germany.

At a cost of approximately $11 billion dollars, Nord Stream 2 is a Russia-led project under the aegis of Russia’s state-owned, multinational energy giant Gazprom, backed-up and partly financed by several European companies. In the end, the pipeline would inevitably turn Russia into the leading oil and gas supplier hub for the European Union [EU]. It would give Putin and Russia greater leverage over the entire European continent, while weakening and bypassing Poland, Ukraine, and other U.S. allies in the region.

Among other things, the completion and implementation of the pipeline will inevitably and inexorably enrich Russia’s by billions of dollars over future decades. Whereas the 1991 dismantling of the Soviet Union took a toll on Russia’s economic strength, the pipeline is sure to give Russia the opportunity for coming back yet as a renewed super-power player in the ongoing geopolitical battle for global expansionism. The pipeline is also prone to advance Russia’s unrelenting yearning to control many EU countries now fledgling democracies in Western Europe.

Vis-à-vis, as you well can imagine, all the ensuing added-value benefits from the pipeline for Russia will, by the same token, result in major disadvantages and drawbacks for the United States of America. Primarily, the United States, more likely than not, is bound to lose influence and control over many of its allies in the region. At this critical juncture in history where geopolitical power struggles, globalism and expansionism play a major role in the future of all nations, the Russian pipeline is sure to weaken the U.S. position; its leverage in these struggles – not to mention setting the stage for yet a return to our oil and gas dependency on foreign cartels, most of them adversaries to our best interests.

Bottom line friends, our esteemed, bright, all-American President, Joe Biden has, once again, following in the footsteps of his predecessor the Manchurian Candidate Barack Obama, not only send us back light-years in the domestic front, but has now, single-handedly, managed to wake up a sleeping giant, formerly put to bed by our cherished former President Ronald Reagan. He [Biden], our brilliant Socialist President, wisely, judiciously, and intelligently handed Europe over to Vladimir Putin in a silver platter albeit while getting nothing, absolutely nothing in return for it – nothing other than the world’s ridicule for his stupidity that is. Then again, might this not be Biden’s quid-pro-quo payback for all the money given to son Hunter by a Russian oligarch?

My dear friends, followers, need I say any more? While it was clear to me, we were in for some great bombshells with this Biden clown as he took the office of President, with every day that passes, it never ceases to amaze me how much worse it is than I ever thought it could be. As far as I am concerned, the cancelling of the Keystone pipeline here at home, together with the waving of sanctions to the Russian pipeline, both, independently and combined, are probably two of [the] most telltale, significant, and revealing confirmations of the hypocrisy, the stupidity, the inanity, the absurdity, the ludicrousness innates to this Communist clown that the democrat electorate chose as our President. Cheers everyone!

I have to admit though, I have mixed emotions about it all. On the one hand, I am deeply saddened by what is in store for all Americans, for us, and for generations to come, our children and grandchildren. On the other hand, however, I cannot help but have a Machiavellian enjoyment by how dreadful it all is – only because, the worse it gets, the better our chances we have for our nation to wake-up, smell the coffee, and, finally, once and for all, claim our country back from this mantra of Left wing, radical Socialist, Marxist ideologues, who know no better than continue on their mission to destroy our country and all it stands for – such as has been already proven this decrepit Biden clown and his domesticated cronies. May God save us and may God save the United Stats of America.