Home Opinions State of the Union 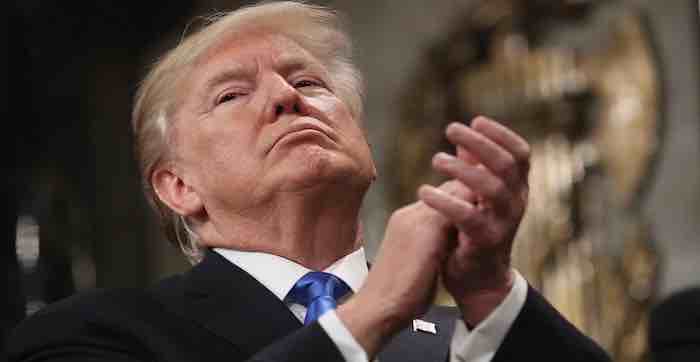 Nearly 46 million people—not including the internet—watched President Trump’s State of the Union address on Tuesday, January 30th. Chances are you were one of them, I bet – I know I did.  Got to tell you folks, every time I write about politics and political themes, most of the time, if not all the time, I do so because I feel compelled to speak out – that simple.  Whenever I do it, I really have no idea whatsoever how many people are really going to read my posts or how many people I will be able to touch and impact with my narratives, but there is that need, after all, to exorcise so that at least I know I can go to sleep with myself.

After watching Trump’s SOU address,  I not only felt compelled to write this chronicle today, but moreover I felt overwhelmingly duty-bound to do so, if only because what I saw went on to confirm, hands down, if ever so convincingly, all of what I have been relentlessly harping-on for years – to wit, the fact that our glorious United States of America, has come ever so close to losing its status as the world’s bastion of liberty, freedom and democracy.  And that alone folks, should be cause for concern to every honest American who loves and respects our Constitutional Republic.

Let me preface my anger by just saying that I thank God for Donald Trump, and so should you.  Every second of every hour, of every day, I praise the Lord for having let our nation elect Donald J. Trump as the 45th president of the United States.  If you remember, it all started in 2015 as up to 17 Republican candidates announced their candidacy for the presidency of the U.S., while the field eventually dwindled down to one – Donald J. Trump.  Divine intervention?  You bet.  No doubt. If you doubt it, all you had to do was watch the State of the Union address, where you could quickly realize how close we have come to becoming a full-fledged Marxist / Communist state and…please, don’t dare doubt this for a second – if you do, just read below.

First, if you really have been paying attention, I don’t think I need tell you or remind you what Trump’s first year in office has been. Don’t need to tell you about Trump’s ongoing war with the “fake” media; with the Liberal Democrats’ witch-hunt to oust him from the presidency- beginning with Christopher Steele’s fabricated Russian collusion dossier paid for by Hillary Clinton and her DNC campaign to the just released FISA (Federal Intelligence Surveillance Act) memo. As expected, the memo raises all kinds ofconcerns with the legitimacy and legality of the DOJ and FBI interactions with the Foreign Intelligence Surveillance Court (FISC) and represents a troubling breakdown of the most basic of legal processes established to protect the American people.

More on this later, however, I thought the best way I could convey my anger and frustration over everything that is taking place in our glorious United States of America, came across as we watched Trump’s SOU address.  You know the old saying: “a picture is worth a thousand words.”  Well, guess what?  During Trump’s address, through the magic of television, the cameras repeatedly captured some live shots of what liberal Democrats are all about – of where we stand as a nation. As far as I am concerned, there it was, for everyone to see, shots of the repugnant Nancy Pelosi, along with Senior U.S. Senator Chuck Schumer, the Congressional Black Caucus and most all members of the Liberal Democratic Party, recalcitrantly refusing to applaud or stand-up as President Trump made mention of events and issues, which were incontrovertibly positive for the nation – even some non-partisan issues dealing with basic righteous causes such as the killing of two young African-American girls by the Salvadorian based MS-13 gang of illegal aliens.

As a tribute to history and as a testament to the point I have been trying to make for years now, let me paraphrase some of the points made by President Trump in his address – points where the Pelosi witch was repeatedly shown as either fiddling with her teeth, while simply refusing to stand or applaud – showing the same disregard, disrespect and disgrace as that shown by NFL players who refuse to stand during the playing of our national anthem in football games.

Some of Trump’s announcements included but were not limited to the following:

Now, I say to you friends, if you have been officially elected as congressman or congresswoman by your constituency to represent you in what should be an agenda that clearly spells out the best interests for the country, would it not be a foregone conclusion that you would do all in your power to fight, promote, endorse, sponsor, encourage, salute and welcome issues such as the ones I have enlisted above?  Vis-à-vis, I ask you, should not anyone that has been elected to Congress opposing these issues, be outright impeached and charged with treason?

I say, which of these issues can you construe to be bad for the nation? Which?  Please tell me.  What am I missing here?  I say, it is obvious, isn’t it?  I say it is obvious when Pelosi, Schumer, and the rest of the democratic mob, decide, in front of a 46 million viewing audience, to just let the world know, in no uncertain terms, that they just don’t give a dam about you and me and our country, do they?  I am going to say it again, it is time folks for each of us to: “wake up and smell the coffee”.  What else, I ask you, do you want to see before I make a believer out of you as to the fact that this is not just Party politics.  This is not just your old bipartisan tugs-of-war.  This is not even a witch-hunt to get rid of Donald Trump.  No, this is not a run-of-the-mill political feud – by no means.  Let me tell you what this is folks.  This is a full-fledged Marxist Revolution – a revolution inspired in the image and spirit of Saul Alinsky’s model and his ‘Rules for Revolution’, later changed to ‘Rules for Radicals’ manual published in 1971, a year before his death.

“For Alinsky, the revolutionary’s purpose was to undermine the system [democracy] and then see what happens.”

By all accounts, during the SOU, as far as I am concerned, the most telling story of all that is now wrong with our nation came when Trump introduced Evelyn Rodriguez, Freddy Cuevas, Elizabeth Alvarado, and Robert Mickens, two sets of African-American parents, whose close friends teenage daughters, Kayla Cuevas and Nisa Mickens, were mercilessly murdered by six members of the savage MS-13 gang who had taken advantage of glaring loopholes in our laws to enter the country as illegal, unaccompanied, alien minors – all the while, get this, as the entire Black Congressional Caucus, simply disavowed Trump’s request to stand-up and honor the emotionally distressed parents of Kayla and Nisa.  Wonder how this black democratic loyalist clique would act had it been one of their sons or daughters the ones murdered by the MS-13 gang?

My fellow-Americans, do not kid yourselves anymore, the impending disarray which has prevailed in our nation for the past decades is not a mere coincidence. All we see going on friends, again, is not by accident – the death of four noble Americans in the Benghazi embassy and the subsequent cover-up attempt of the incident by Hillary Clinton and her staff as they deceivingly tried to blame the attack on some sort of irrelevant terrorist video is not a coincidence; the convenient acid-washed disappearance of 33,000 emails; the disgraceful behavior of FBI director James Comey in his role as lead investigator of Clinton’s alleged break in the nation’s security; the alleged approval by Secretary of State Hillary Clinton of 20% of the United States Uranium to Russia in exchange for $145 million-dollar donation to the Clinton Foundation; the alleged involvement of high government officials from some of our nation’s once most revered institutions such as the Department of Justice and the FBI, all but suggest that the state of corruption in the nation, is rampantly out of control, where even ex-president Barack Obama himself, seems to have been a part of the corruption by blessing the culprits.  By aiding and abetting the culprits in finding ways to circumvent our legal system lending them immunity so that they could get away with murder and be left untouched by the legal system– is as close if you will as we have ever come to the way they do business in third-world countries and banana republics all over the world – scary yes.

Finally, I had watched Trump’s address on Fox News – just about the only viable media left for those of us who want our country back, and, right after the address, to add insult to injury, I had the displeasure of watching the democrats’ answer to Trump’s State of the Union, given by none other than Joe Kennedy III.  Listening to Kennedy was like the ‘icing on the cake’.  Kennedy’s diatribe was par for the course.  As I watched him, I just thought to myself, will we as a nation ever get politically rid of the Kennedy plague?  Are we going to have to endure another Kennedy again?  Have not all these Kennedys done enough political damage throughout the years?  Do we really have to listen to one more of these spoiled Massachusetts socialites stick their nose in the nation’s affairs?  All I hope is for this new fifth-generation garden-variety to go back to Cape Cod along Nantucket Sound in their Hyannis Port Kingdom and find himself something better to do than come out to get down on the nation’s progress under Trump.  Please spare us the tirade.

Frankly, I don’t know where we are headed.  I could only see redemption if all those who have circumvented our legal system, including but not limited to high-post officers in the last administration, from the President on down to the Secretary of State, to the head of the DOJ, the Attorney General, the entire 7th floor of the FBI, along with each and every government employee who has broken the law and undermined our nation’s legal system as they are finally brought to justice, tried, and locked-up for the crimes committed.  Yes, I know.  I know it will not happen.  Too late.  The Marxist revolution has gained enough foothold to where anarchy, lawlessness and mayhem are now an inherent part of the establishment – a state of disarray which became self-evident last Tuesday, January 30th on a State of the Union address, where the foot-soldiers of the Marxist revolution had no qualms in showing the world their displeasure towards our nation’s progress; towards a nation that finally decided and ended-up electing a president who was able in his first year in office to finally begin to unravel all the wrongdoings done by his Marxist predecessor – a president Trump whose legacy in his first year has been that of restoring the nation to its former glory as a constitutional democratic republic, as the bastion of freedom it had always been for all peoples of the world.  May God save us and may God save the United States of America.