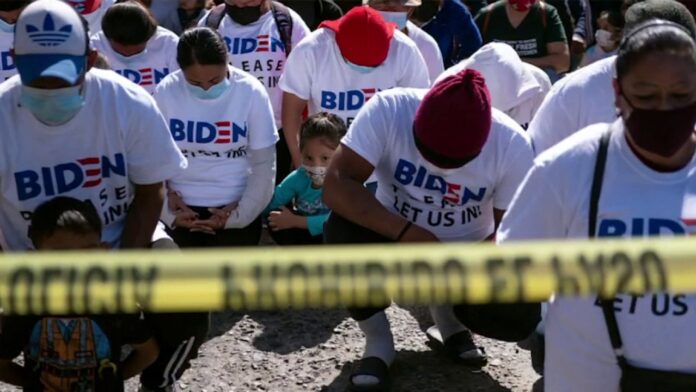 Hi friends, followers. You might or might not have noticed, I have taken a three-week sabbatical or a leave of absence from my habitual political commentaries. To be honest with you all, I did not know where to begin. Last Thursday, I watched Biden’s first press conference and I thought it was one of the most repulsive spectacles ever in political history. 65 days after taking the oath of President, Joe Biden offered his first press conference – longest any president has waited to make himself accessible to the media in decades. Wonder why?

I will only go as far as, again, saying this had to have been one of [the] most sorry political spectacles ever. As usual, the clown was his old lost self, coming through as a deteriorating, cognitively decadent, disorientated, senile, and absent-minded old geezer. I could not help but think what world leaders of our enemy states would think of this presumed leader of the free world as they watched this idiot continuing to make an ass of himself and our great nation. Not to mention, this time around there was an added attraction. To now, notwithstanding his obvious stupidity, there was an air of diffidence about the man – one which I thought came with the territory, an acknowledgment of his intellectual shortcomings. In this press conference, however, I noted an air of arrogance, of condescension which compounded my absolute antipathy for this man.

But…frankly, I am not in the mood to even talk about the press conference. I will let those of you who watched it, reach your own conclusions. As far as today’s narrative is concerned, well, I could have had my pick of virtually hundreds of topics, each of which, independently and combined speak volumes as to the prevalent deterioration of our nation in just 68 days since this idiot became President.

I could talk about all that is going wrong, you name it. Domestically, taxes rising, gas prices going up at the gas pumps, the national debt out of control – you name it. Not to mention in the global spectrum, North Korea starting their nuclear missile testing program again. Iran praising the Biden administration. In a much-heralded U.S. / China Summit in Anchorage, the Chinese threatened the world stability and accused the U.S. of human rights hypocrisy due to their mistreatment of Blacks, bringing to light Black Lives Matter as the example of their claim – all the while as our new Secretary of State Anton Blinken apologetically pandered to the Chinese.

So…you know how close we are to hitting bottom when, of all people, Communist China clamors for human rights violations in the U.S. Really? But like I said, out of the many topics from which I could have picked and chosen today, I chose, instead, one of my favorite crises of this Marxist Democratic administration. Any ideas? If you guessed the migrant crisis at the southern border, you guessed right friends. If you remember, in one of my previous narratives, I said the worse it gets, the better and/or the sooner we can rid ourselves from this Communist mantra takeover.

I make no apologies in admitting that I am rooting for the worse to go wrong with this administration. And, if you think about it, I think this out-of-control crisis at our Mexican border is becoming exactly that to where I think it may be God sent. Speaking of the immigration problem, during the four years of the Trump administration we became poignantly used to the radical Left’s favorite propaganda slogan about “Trump’s inhumane policies holding immigrant children in cages and separating them from their parents.” How callous of Trump. How inhumane.

How about, Mr. Biden, if I told you that conditions for the care of children are deplorable at best? And, what about the risks of the COVID pandemic among the immigrants and among the U.S. population exposed to infested immigrants? And, what about your immigration policies contributing to the Mexican Cartels’ enrichment with the human trafficking of hundreds of thousands of children? And where is the kindness and humanity in motivating parents to send their children alone to the care of drug lords? Were you guys not mad at Trump for separating children from their parents?

Why Mr. Biden, would you prevent the world from peaking at the facilities holding the illegal immigrants? Is there anything, Mr. President you do want the American people to see? Why were there serious attempts to preclude Republican Senators from taking pictures of your migrant children in cages? Why have you not taken a quick tour to the border Mr. President. Why does your vice-president laugh and neighs like horse when asked if she was planning on going to the border?

I personally think the present border crisis sort of encapsulates, captures, and compresses the essence of everything that is wrong with this administration and our country under this administration. Think about it for a moment if you will. First and foremost, there is the untamed and immensely popular hypocrisy. When asked about the crisis, your administration Mr. Biden, to this day, is in a complete denial mode. It is not a crisis, they say, it is a challenge and, according to your National Security Advisor, Cuban-born Alejandro Mayorkas, everything is under control – guess he was well-trained by the Castro brothers.

So, Biden reverses Trump’s “Remain in Mexico” policy which he implemented with the help and cooperation of Mexican President Andrés Manuel López Obrador; he puts a hold to the border-wall construction even though it was already paid for; he sends an open invitation for migrants from all over the world to come over; for MS-13 gangsters, for world-wide terrorists; for drug smugglers; for COVID infested immigrants. Bottom line, we now have a joint-venture deal with the Mexican drug cartels in human and drug trafficking. We have millions of illegal immigrants ready to compete for jobs with unemployed Americans, all the while as you and I will subsidize with our hard earned tax money the healthcare and well-being of millions of illegal immigrants.

My dear friends and followers, need I say any more? You know what? I am sticking to my guns. I hope and pray, that it will get to where this crisis is unsustainable. I hope and pray that another ten or fifteen million or more immigrants come. I hope that millions of more children come. I hope this crisis will become a telltale sign to of all of you who voted for this clown and for this Junta of Socialists, Marxists and Communists, just so that you all get a taste of your own medicine. I think this border crisis may be God sent after all, only because, despite our corrupt media efforts to conceal it and despite the administration’s best efforts to hide it, the crisis is of such magnitude it is blatantly obvious for all to witness what is really going on.

It is not, dear friends, followers, about humanity, about caring for children, about anything other than an unleashed desire to add votes in the next elections, and, yes, it is also about the war against Trump – the Democrat’s nemesis; about destroying our Constitutional Republic and completing Obama’s commitment to fundamentally transforming the great United States of America. May God save us and may God save the United States of America.