Communism – a legacy of 200 million deaths over the past 100 years.

Transcript from the video:

This is the second in a series of videos which I have labeled “Communism 101”.

One of many more to come in the next few weeks and months. And, as I said in my first video, over the past decades the United States of America is undergoing a major transformation into becoming a full-blown, full-fledged Communist Republic.

Ironically, on a poll that was conducted by Rasmussen in 2011 it showed that 11% of Americans think that Communism would better serve our country rather than our current system of capitalism and democracy. Now, since 2011, that number – that 11% must have grown a lot larger, which goes only to tell you that Communists have done a darn good job misinforming and indoctrinating Americans into believing that Communism is a positive system instead of the reality that tells us that Communism is the worst system, the most evil system known to mankind, bar none.

My video today deals – specifically focuses precisely on how evil Communism has been throughout history. Like they say, “The proof is in the pudding”. So… the first thing that I want to do today is share with you all a brief summary of the death-count that has been attributed to Communism over the past 100 years.

Number of deaths that can be attributed to Communism over the past 100 years.

Deaths that have been excluded from the body count:

Whenever you talk about deaths under Communism, this is a topic that is very, very dear to my heart, as I was born in Cuba, lived under Communism from which I fled and was separated from my parents at age 14 and, I can tell you, specifically to all you righteous Democrats who continue to clamor for: “children and families that have been separated at the border” – this is nothing, nothing compared to what Communism will do.

I can tell you from first-hand experience that Communism is, by far, the most evil, wicked, and malevolent system known to mankind – which makes this democratic clamor for family separation pale in comparison. To all of you Communists out there, which I call “Useful Idiots”, to all 36 million of you who, according to Rasmussen, support Communism, let me tell you something – as I just showed you in the segment before, there have been, like I said, 200 million deaths that have been attributed to Communism, of which, if you paid attention, 73,000 deaths were included in that 200 million, were attributed to deaths in my native island of Cuba.

Well, guess what? I dare say that you can add a few thousand more deaths to that number of people that died while trying to escape from Communism, as they took to the seas in skimpy, home-made rafts mostly made out of truck tire tubes such as those that I am showing in these pictures. While entire families went into shark-infested waters in the Florida Straights seeking freedom from Communism and the dictatorship of Cuba’s genocidal monster Fidel Castro.

You have heard the old adage that says: “A picture is worth a thousand words”, well folks, just take a look at the picture I am showing now of this Cuban rafter who fled Cuba and traveled to Florida all by himself in a tire tube. 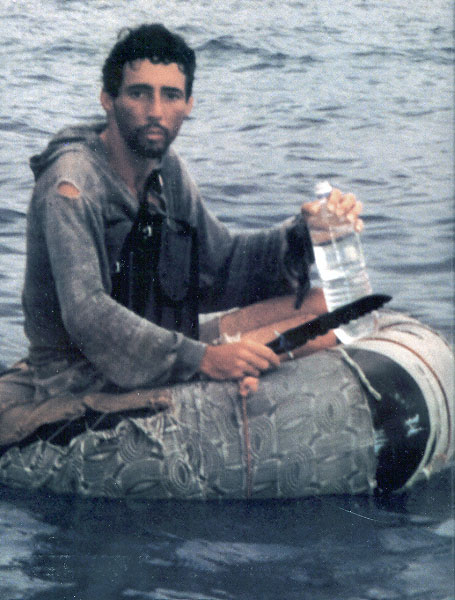 I think this picture alone, in itself tells the whole story of what the fear of Communism can do to people. As you would and could expect, there are no verifiable records of how many of my fellow-Cubans died in their quest for freedom in the Florida Straights – only God knows! But the point that I am trying to make is, while all you romantic Communists continue to endorse this heinous system, just think for a moment: How bad must it be for anyone willing to sacrifice their life by traveling 90 miles in a rickety floating device? Is this what you want for your glorious United States of America?

Just so that you know, by endorsing Communism and radical Socialism, all you are really doing is endorsing the killing of millions more. By voting Democrat in 2020, you will be just as well, promoting the propagation of Communism and the continuance of a legacy of death and destruction. So, you better think about it.

For God’s Sake, don’t be a part of the demise that would ensue from handing over, from handing over our nation to this mantra of liars who like to call themselves Socialists, Progressives, Liberals and all kinds of names to disguise the true nature of their ideology, which is in reality nothing but Marxism and Communism.

Do not fall for this venomous, malignant and bitter disinformation and propaganda crusade that is now eroding into the nation’s freedoms – into our sacred democracy and capitalism. Thank you. And may God bless you and may God bless the United States of America.

Is the U.S. Becoming a Communist Nation?