Home Politics What’s ahead for Florida? 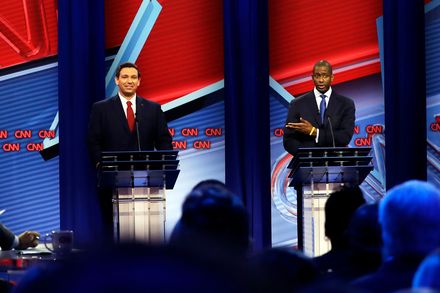 My narrative today is dedicated to all my residents friends of Florida. Got to tell you folks, I am terror-stricken with this Florida governor’s race between Andrew Gillum and Ron DeSantis. Last time I checked Gillum was up by 5.8 points. What’s worse is that virtually since the race started, Gillum has steadily maintained a lead over DeSantis. Yes, I know better than to trust the polls, but, I also know better that when leads are sustainably maintained there should be cause for concern – this is not pessimism friends – this is realism. With 12 days left to election day, the spread between candidates in the polls, I contend, should be much narrower for DeSantis to have a shot.

To be honest, I am taking it one step further, while there is still hope that we win both the Senate and the House at the national level, and whether we do, or we don’t, I am more concerned with what happens here in our backyard, albeit I look at both levels of the elections with all kinds of apprehension. But Florida, my God, the thought alone of having Andrew Gillum as our governor gives me chills up my spine.

Ironically, while I was writing this chronicle, I took a brake to watch the Gillum / DeSantis debate on T.V., to give you a better insight on what is going on. And… I must be honest with you folks, as I watched it, and despite my best wishes for otherwise, I gave the win to Gillum and, for the life of me, I could not figure why. Going into the debate, I presumed that with the news coming out as recently as this past Sunday, a couple of days back, that Gillum was under investigation by the FBI for corruption for allegedly taking perks from an undercover agent posing as a real estate investor, I thought would be enough for DeSantis to win the debate handily.

Instead, DeSantis spent the entire debate on the “defensive”. Gillum, on the other hand, came through as being calm and collected even when DeSantis referred to the infamous corruption case. For the most part of the debate, Gillum remained poised and self-assured– amazing I thought. Vis-à-vis, DeSantis seemed rattled by some of Gillum’s attacks. He was sweaty, and you could tell a mile away he was all but composed. As I was watching these two go at each other, I could not help but be reminded of that infamous debate back in 1960 between a young democrat rising star John F. Kennedy, and his seasoned political opponent by the name of Richard Nixon. I thought there were many parallels to today’s Gillum / DeSantis debate, when the popular Kennedy defeated Nixon, mostly because of the way that the former manhandled the debate on national T.V. Déjà vu I said to myself.

As an avowed, if yet untrained fanatic of behavioral psychology it just dawned on me that, in a world of dirty politics, many of these savvy, street-wise politicians such as our friend here Andrew Gillum, have an advantage over the more decent folks. Their poise comes from a school of hard-knocks; they can lie and get away with it; they all have thick skins; they are, for the most part, used to fighting dirty, thus their advantage on debates such as last night’s. As far as this Gillum character is concerned, you must admit the man [Gillum], much like Barack Obama, comes through as “suave” and debonair – he is charming, personable and soft-spoken. Admittedly, Gillum has a more appealing stage presence than does DeSantis. Scary. To make matters worse, the fact that he is black, given Florida’s political landscape, is an added-value bonus, much like was with Obama back in 2008. And, regretfully, there are many voters out there, that simply ignore the issues and end-up voting for trivialities such as looks and the like – a truism, believe me.

Just think about it, Gillum’s backing comes mostly from non-white voters, women, younger voters and independents. Gillum has all but consolidated the base of the Democratic party here in Florida, while DeSantis hasn’t. Our state of Florida is mostly made-up of retirees or otherwise transplants from other states, mostly New York and the like – and for the most part the state has slowly, over the years, been turning Democrat, thus it is no surprise for Gillum to be leading in the polls despite his terrible record as a Mayor of Tallahassee, as many of the implants don’t even know where Tallahassee is.

All I can tell you is watch out, I think of Gillum and I think of the wolf in the children’s tale of “Little Red Riding Hood” – the man is your quintessential demagogue – he will say anything you want to hear so long as he gets his way. Behind that well-suited, smooth-tongued, distingué person, there is a political monster. Much in the same spirit and tradition as that of Obama, Gillum comes with that Messianic aura of radical change and transformation, if only to disguise a true Marxist’s platform. His communist inclines are as latent and extremist as those of Bernie Sanders and Alexandria Ocasio-Cortez, if only subdued to the point that it may go unnoticed by many in the voting universe.

Just so that you all don’t say I didn’t tell you, Andrew Gillum’s platforms reads as a younger twenty-first century version of Marx’ Manifesto. His aversion for powerful capitalism is pathetically obvious. He has already announced his intentions to raise taxes by one billion dollars; he condemns Israel; he is an avid Trump-hater and claims that, if elected, he will try to impeach Trump; he is for gun-control and the abolishment of ICE. What else do you need to know about this man who has admitted to a radical agenda a la Saul Alinsky, just about all except as to the fact that he is your textbook communist.

If elected, I see our state being turned into a small nation within a nation. I see us as becoming a Marxist state; with our very own totalitarian rule-of-law; I see another Obama, if yet a more radically resentful African-American, with a disgruntled grudge against capitalism. I say if this man is elected brace yourself for what is ahead. Anyways, if this guy is elected, again, you can’t say I did not warn you. I will then stick to the old cliché, “you can lead a horse to water, but you can’t make him drink”.

Ask you may, is there a way to stop this from happening? I say there is. I say there is if only one way and one way only. That is, get out and vote. Considering the odds and what is at stake, each Republican in the state should get out and vote. Early voting is now open to all of us. We must not let this Gillum monster become our governor. I also want to plead to my fellow African-Americans in the state to do your part. You should not vote for this man only because the color of his skin is the same as yours. You must do a Kanye West and stand your own grounds by voting for DeSantis.

As for me, I’ll tell you what, if Andrew Gillum is elected, I will give serious consideration to moving elsewhere – I am not ruling out Cuba or Venezuela, after all they already have the same system as we would here in Florida, if only with better beaches. God save us, and God save America.