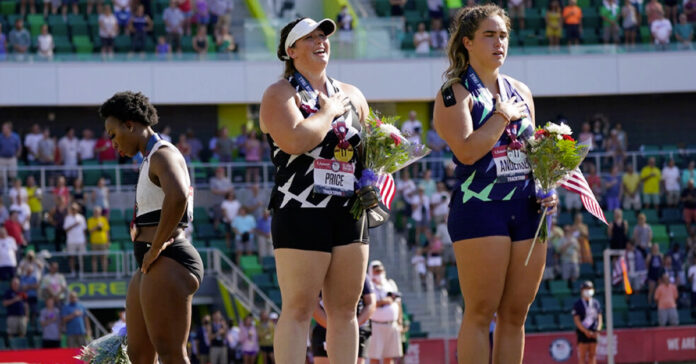 A US hammer thrower turned away from the American flag as the national anthem played while she and two other athletes stood on the podium at the Olympic trials Saturday, later saying she was “pissed” that “The Star-Spangled Banner” played as she received her bronze medal. Gwen Berry — who qualified for her second US Olympic team during the trials — shifted to face the stands rather than the flag before holding up a black shirt that read, “Activist Athlete.”

Dear Gwen, you are very lucky to live in a country that has a Constitution to allow individual freedom.

In so-called Socialists, in reality, tyrannies, like Cuba if you had pulled this self-aggrandizing stunt you would be in jail or maybe even dead! Of course, your being free would give you the option of leaving, without the risk of surviving an escape in a raft with a high percentage of ending your life.

Another choice to change what you see as evil is staying and working peacefully to make the nation better. What you should not do is “having your cake and eating it too”. Getting a place in any Nation’s Olympic team’s motivation is to be a symbol of where you live. If you hate it, you should avoid being part, maybe even exercising your right to protest in other more appropriate venues.

Insulting what you are representing only demonstrates selfishness, ignorance, and false patriotism. It is an action made by cowards, to be ashamed of, not to be proud. Protests, to be valid, have to show sacrifice.

In the early days of Castro when socialism was predicated, as is fashionable here now before it turned to a communist dictatorship, all the University Professors had to go through a student-led tribune to return to their posts.

After the purge, only two of the ones that passed the test had the courage to resign. I know, because my father was one of the two. His protest came by sacrificing one of his loves, teaching. He went through public insults and demeaning comments. He escaped physical harm from Castro because of his being well known in the World as a scientist, and it was too early for the soon-to-be dictator to show his hand.

Afterward, he and the family immigrated to the US, to start a new life. I recommend that you experience a small taste of what you seem to desire. Move to Cuba, join their Olympic team, and insult the flag! Maybe then you will realize that freedom has to be loved and respected.

I truly hope that the US Olympic leaders follow your desire and keep you out of the team. If not, it would be another sign of our decadence as a “free” country.