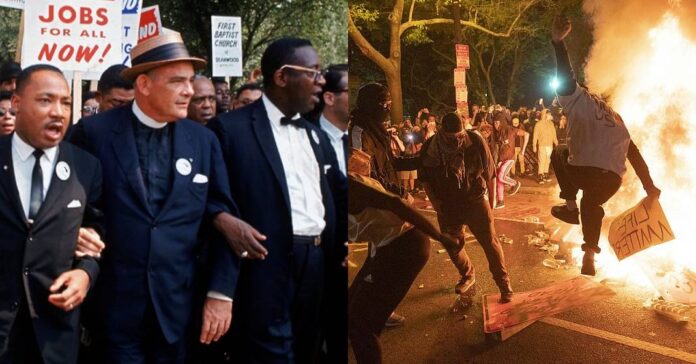 “In the process of gaining our rightful place we must not be guilty of wrongful deeds. Let us not seek to satisfy our thirst for freedom by drinking from the cup of bitterness and hatred. We must forever conduct our struggle on the high plane of dignity and discipline. We must not allow our creative protest to degenerate into physical violence. Again and again we must rise to the majestic heights of meeting physical force with soul force.” of our forefather’s creation based on total individual freedom, choice, and responsibility.

Every year I place these thoughts in MLK Day.

In these days of turmoil when the traditional right to peacefully protest is being hijacked by anarchists whose goal is not reforming and improving our system but replacing it, I thought that it would be good to remember his words today 57 years after its delivery.

It was originally intended to emphasize the continued plight of blacks and also to reflect on myself and other compatriots thoughts and longings re; Cuba.

This year, ML King’s words unfortunately apply to all citizens regardless of race, sex, or place of origin.

Everyone of us is threatened by the philosophy of some elected politicians that aim to impose upon everyone controls in our way of life, with the often promised and always failed collectivism where a few would decide everyone’s duties by having “we the people” receive all kinds of gratuities in exchange for freedom of choice.

This action if successful will be the total opposite of our forefather’s creation based on total individual freedom, choice, and responsibility.

A year has passed and with a new president.

MLK would be appalled at the way “racism” is now portrayed and the solutions proposed.

For those false “saviors” that demand “equity”, a radical change of our culture, our history, and form of governance, practicing the worst form of “racism” in order to rule everyone regardless of race, it is promoting the opposite of MLK’s hope, the one he gave his life for!

Today we celebrate 59 years after his speech “I have a dream” when in his memorable words he enunciated the hopes, aspirations and wishes for freedom of every person regardless of race.

Fifty three years after his death, among all the celebratory speeches, the adulations and criticism of his views, very little is said about where we are as far of fulfilling his “dream”.

There is no question that institutional racism has been greatly diminished, as exemplified by our having twice elected a president half black, the many blacks in the government of both parties that represent our country here and abroad, and the ones that more frequently than not, achieve prominence in the civil world of arts, science and industry.

The question remains of why if opportunity and institutional equality is improving, the lives of the majority of African Americans are not.

The family values, religious beliefs, and feelings of personal worth, that were the strength that King Jr. counted on to fulfill his dream, have been eroded.

The reason, though somewhat obvious, is one not frequently discussed.

Martin Luther King’s desires have been betrayed, not by most whites, not by the legal system, not by one political party, but by some black and white leaders that have abused the words of a few and the yearnings of many to exploit and maintain and increase the past inequalities for the sole purpose of their personal ambitions and enrichment.

I also had a dream.

Like many of our compatriots, I fantasized of a day when our beautiful country Cuba, would finally achieve the political maturity, and appropriate governance to come together with the economic and social improvements that were part of our way of life.

We had a disruption of the electoral process when Batista, for whatever reason, took over power.

We shunned the obvious peaceful solutions offered to return to a democratic stability, and we were seduced by a mostly unknown person that started a process of destruction.

Many fought for our ideals, some giving their lives and/or freedom, while others by destiny and or cowardice remained untouched losing only their material belongings.

And what happened to our dreams?

We, like MLK’s dreamers are being deceived by our own kind.

Many of our leaders are responding to their personal ambitions forgoing the meaning of liberty.

Our martyrs, our sacrifices, our hopes to return to the existence that we once enjoyed, have been betrayed by the so called leaders that will pact with the Castro’s and or their successors promising a life of entitlements in exchange for continuing lack of freedom.

Martin Luther King Jr. did not live to see how his words were never acted on, and my generation will suffer the same fate.

As Martin Luther King Jr. so clearly said in his unforgettable speech “I have a dream”, I also share a dream with my African-American friends, that if not today, some day our children in Cuba and here will at last live as promised in our Declaration of Independence “That all men are created equal, that they are endowed by their Creator with certain unalienable Rights, that among these are Life, Liberty and the pursuit of Happiness”, and see the moment when: