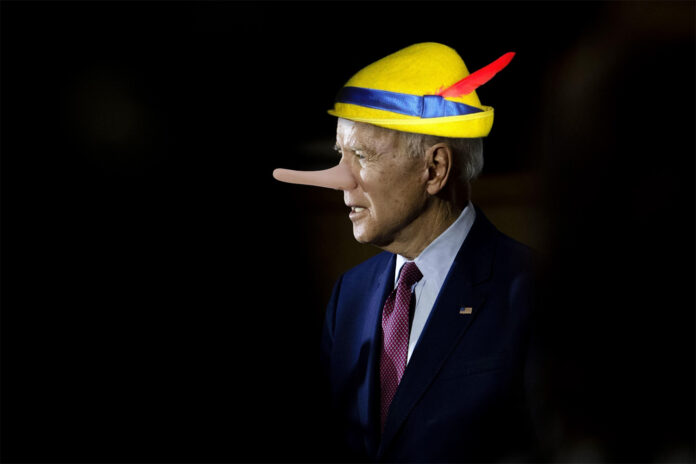 I do not know about you, but I thought last night’s speech by the Biden clown could better serve Americans with a sleeping disorder. Ten minutes into the diatribe, I found myself dosing-off watching this first-class idiot go through the motions of pretending to be a statesman. Making matters worse, was the sight of the two hyenas, Harris, and Pelosi on the background. The whole spectacle was hard to stomach on what seemed like a never-ending exercise in a newly-found torture tactic – I personally would take, hands down, the “waterboarding” torturing technique over having to watch this idiot for almost an hour like we did last night.

So, anyways, let me give you my two cents on Biden’s first State of the Union address, which was not labeled as such only because tradition has it that all presidents’ first address to Congress are branded as a “message” instead. Mind you, this one distantly far from being a message, albeit, the latter are short, while this one, at times seemed interminable, never-ending, and endlessly boring.

So, Biden’s speech to Congress came one day shy of his first 100th day in office. After watching last night’s sermon, using today’s popular fact-checking criteria would earn Biden a minimum of five Pinocchios. On the very first part of the speech, Biden went out-of-his-way to take credit for strides of his administration on fighting COVID-19 – noting that 220 million vaccines had been administered. What he conveniently forgot to mention was the fact that it was Trump’s “Operation Warp Speed” which truly made possible the development, manufacturing and distribution of COVID-19 vaccines, therapeutics, and diagnostics. But no, it was he [Biden], the redeemer, the savior of mankind who made it all possible. What is sad is that, I will bet you anything, many of the nation’s “Useful Idiots”, will buy into Biden’s sickening lies, which we all have gotten used to by now.

The liar went on to say he had “inherited a nation in crisis”, which, reassured me once again of the man’s evident degenerative cognitive syndrome, which together with a severe case of hypocrisy, explains how he can make such a statement. I am certain that the concoction of Alzheimer, along with his compulsive lying disorder and his pathetic political and economic shortsightedness, all, independently and combined blinded him sufficiently as to ignore and discredit Trump’s enviable records of successes and progress prior to the COVID-19 pandemic, as compared to this clown’s first 100 days in office which will probably go down in history as one of the worse-ever performances by any President in the history of the nation.

Actually, and ironically Mr. Biden, it is precisely the other way around. Notwithstanding the ensuing damages of the COVID-19 pandemic, you inherited one of our nation’s best economies ever and your so-called “crisis” is all your doing, sir. Matter of fact, I cannot think of one single good thing you and your administration have done for this country thus far. Your immigration crisis at the southern border must be one of our nation’s most shameful chapters in history ever. Talk about children in cages, talk about drug cartels trafficking in human lives, drugs – you name it. Talk about “crises.” Under your watch, you creep, all in this nation is rapidly going “South.” With a quick stroke of your pen and your Executive Orders you have done more to harm this nation than all 45 presidents before you – you clown.

The imbecile spent most of the rest of the time, doing what he and the democrats do best, that is, he spent a lot of time, selling the American people on the fact that there is systemic racism in our nation; on the need to take away our guns; and on the fact that Big Government will continue on a reckless spending spree, now with an added 6 trillion dollars which, according to him [Biden], only those making over $400,000 dollars and the big tech companies would end-up paying for.

In the same old spirit and tradition of all Marxist / Communists countries, Biden’s mastery of demagoguery now includes all kinds of “free” subsidies. The latest in a series of Trojan Horses subvention packages, following a presumed COVID-19 Stimulus Bill and a highly politicized “Infrastructure” package, both filled with “pork” expenditures that had little, if anything, to do with their labels. The latest now is a $1.8 trillion-dollar American Families Plan, introduced last night, presumably allocated for investments in families and children. Sure.

Now, if you think you and I will not end up paying for all of Biden’s irresponsible spending, then, as I said before, you must also believe that Santa Claus, the Fairy Godmother, and Little Red Riding Hood are all real characters, don’t you? Yes, like the “Big Tech” Corporations in America are not going to either pass through their heightened taxes and/or they will expeditiously move their businesses to Communist China as well they have over the past years. Really Biden? So middle-class Americans will not pay for your kindheartedness, really, you mean that, don’t you? And, we are we suppose to believe it, right?

Folks, friends, let me tell you, Biden’s speech last night, was, no more no less, than a highly manicured speech by a Marxist President selling the American people with a radical agenda of transformation, which is all but too obvious to those of us who have been there and done that, as what happened to us in our beloved island of Cuba. Biden’s policies, last night’s speech, his tactics, his mannerisms or otherwise his well-scripted agenda were all designed to appease a professed cabal of Communists such as Bernie Sanders, Alexandria Ocasio-Cortez, Elizabeth Warren and others, all a part of the real administrators at the helm of this great vessel we once knew as the United States of America.

I cannot close today’s narrative however without giving credit to Republican Senator from South Carolina Tim Scott on his eloquent and energetic rebuking to Biden’s rant, for which he was racially slandered as he was called “Uncle Tim” with the blessings of the ever-righteous liberal left medium Twitter. I will close today’s narrative by reminding us that we are all facing an uphill battle which we should not have ever allow getting it to where we are today. The fact that, after all that has transpired in this man’s first 100 days in office, is still amply endorsed by the nation’s mainstream fringe media is, as far as I am concerned, a telltale sign of how bad things are really in our great nation.

Dear friends, followers, fellow-Americans, it is time to reclaim our country from these Communists; it is time to speak our minds; we cannot allow for this mantra of Marxist, Socialist, Communists to shut us down. Please join me in combating Communism. Please share this narrative with as many people as you can.   Last, i would really appreciate if you can leave me a comment on how you feel about all that is going on with this administration. May God save us and may God save the United States of America. Long-live democracy, capitalism and our Constitutional Republic.