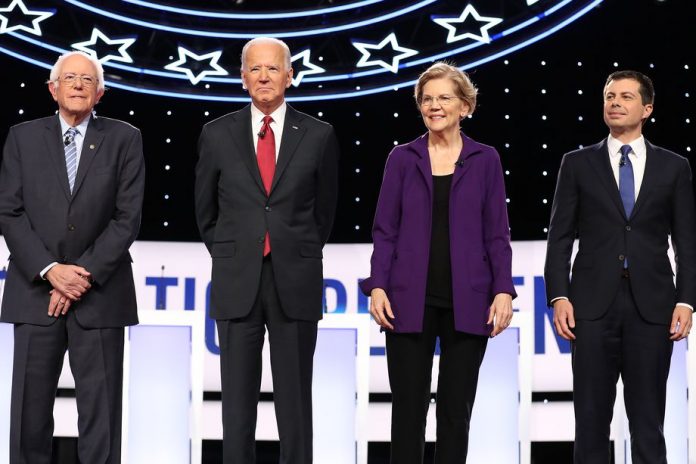 Last night I made the unfortunate decision to watch the Democratic Debate, only to find “more-of-the-same”. Despite my best wishes and in spite of my wife’s explicit opposition to, as she put it: “waste our time”, I ended up watching all three hours of the Circus. As I explained to the old-lady, only reason I stomached the debate was, I’ve always believed in asserting where the ‘enemy’ stands. If we only listen to Trump in his rallies and Fox News’ channel, we’d never know what they [the enemy] is up to, won’t we?

So…case you missed it, let me kind of give you my two bits on it. I will start by saying that, from my very own personal perspective, I found this Ohio debate, somewhat a little less boring than all the previous Democratic debates; more confrontational maybe; mind you, not to say, the interactions between the twelve democratic clowns would have been better suited for a sketch on SNL [Saturday Night Live], than would for a presidential debate.

Anyways, while most of the nation’s political experts, commentators, critics or otherwise reporters took time to dissect the very specific dialogues of the candidates, the issues, etc., I came out of the experience with a sobering realization, once again, that whether or not we realize it, we are one step away from becoming a Communist State, albeit, no one else in the nation, dares use the word “Communism” – a subject very much deserving its own narrative some other time.

As far as I am concerned, [the] most controversial and strikingly obvious inference one perceives after watching this entire debate is the incredible hatred, acrimony, bitterness and antipathy the “Dems” have for president Trump. I knew it was bad, but never this bad. Most all candidates delighted themselves in disparaging Trump for just about everything, which was sort of “to-be-expected”, nonetheless, I thought one of the evening’s most contentious remarks came from newcomer and despicable billionaire activist Tom Steyer when he said that: “every candidate in the stage was more decent, more coherent and more patriotic than the [criminal] in the White House.” Absolutely repulsive.

Now, folks, to the best of my knowledge, never in the history of this nation, have political divides gone as far as calling a president ‘a criminal’ publicly. Goes only to show that we are not dealing here with partisan politics, we are, instead, dealing with an out-and-out ideological war, à la Karl Marx – an outright ideological revolution.

So, you would figure on a presidential debate, there would be all sorts of pertinent topics up for discussion – yet, in last night’s debate, the core of the issues were focused on president Trump’s impeachment, or otherwise how to dismantle and destroy anything and everything that deals with “capitalism”.

I think probably these were [the] two topics that consumed most of the candidates talking points, with Satanically leading questions by opinionated CNN fake-news’ hosts, as was the case when the loathsome Anderson Cooper posed a question to Biden regarding his son, Hunter Biden’s illegal involvement with a Ukraine company, where he [Cooper] says: “Mr. Vice-President, president Trump has ‘falsely’ accused your son…” Please, I thought it was nauseating to hear a host’s barefaced partisan question as he publicly passed a guilty judgement on the president with a leading question that presumed the president’s accusation of Biden’s son as being ‘false’.

Anyways, if you ask me, I thought each of the contenders were there same old selves. Bernie Sanders, once again, got to give him credit for just coming out and publicly acknowledging he is a diehard Marxist. Admittedly, the old SOB despises capitalism and his Communist platforms read like nothing short than Marx’s Manifesto. It is no wonder, that the Mod Squad, AOC Alexandria Ocasio-Cortez and her radical court of cronies Omar, Pressley and Tlaib, have all announced their support for the old-fart Sanders.

Joe Bidden, what can I tell you? Guy is a first-class idiot, no wonder his is in a free-fall on the polls. You can fool some of the people some of the time…but not all the people all the time. President Trump said it best in one of his latter rallies when he said that Biden was only good to kiss Obama’s ass. What an imbecile this guy is.

Elizabeth Warren, what can I tell you about Sanders’ partner in crime? As the new front-runner in the polls, she was the subject of mild attacks by most all the candidates. Now, as far as I am concerned, if this Warren idiot continues as the Dems’ choice for their candidate, I dare say friends, we are in good shape – the republicans are. I think this woman is one of the biggest phonies in the presidential race. She has a habit about lying on everything she says, and she has a habit of not knowing what the hell she is talking about. She seems to speak ‘in tongues’ as though someone put a coin into her mouth which got her started on scripted talking points that end-up saying nothing.

Pocahontas, the name given to Warren by Trump, as she falsely tried to impersonate herself as a Native American to gain the support of minority voters, she continues dissenting about a platform that claims to give trillions of dollars’ worth in free everything to everyone; from healthcare, to welfare, to education, you name it. When asked how she intends to pay for it, the answers invariably deviate to rhetorical innuendos, as she and all of the contenders seem to agree to raise taxes on the wealthy; do away with corporate America; do away with fossil fuels; re-invent the United States of America under a Green New Deal, proposed by an illiterate bartender and supported by all the clowns.

Every single one of the son-of-bitches’ platforms call for penalizing the upper classes; mind you, including America’s middle-class, as much as none of the them admit to the fact that, they would in fact raise taxes on just about everyone in America – this being [the] only way to subsidize all the freebees they are promising to an army of Useful Idiots. Those who believe they will finally get something for nothing – the failed; the envious; the under-achievers; the unsuccessful and all those gullible idiots who have fallen for the blatant lies used by Communism as their only means of accessing control of nations throughout history.

Make a long story short folks, I personally think the debate did not do much to change anything in the democratic presidential race, except maybe than help president Trump reassure himself of a re-election as every day that passes, the Democratic Party digs itself further into a hole by virtue of the fact that the Party shows more and more their radical left inclines. I truly believe, for the most part, Americans have come to the realization that the Democratic Party has all but embraced the Marxist principles that are a preamble to Communism.

In summary, last night’s Democratic Debate did nothing else than, one more time, forewarn Americans, what would be in store for all of us, should anyone of these son-of-bitches became president. Among others things my fellow-Americans, it is no secret, you can expect for capitalism to be uprooted at its very core; you can expect for corporate America to be abolished, extinguished, effaced as the idea of “making money” in America will be looked upon by Communist Democrats as an ‘evil practice’.

You can expect for abortions, included late-term abortions to be a well-accepted notion, under the Democrats renewed Roe vs. Wade umbrella; you can expect to receive government subsidies on healthcare, education and others, yet you will not be able to afford most of the commodities you now enjoy as you will be the ones paying for the subsidies by virtue of the inevitable increases in taxation; you can expect to turn-in your guns as your new government will be afraid you may use them against them; you can expect for our nation to become energy-dependent again and have the world oil cartels call the shots as far as how much gas we can consume and what price will we pay for a gallon of gas. You can expect your United States of America to become the trash-can of the worlds’ unwanted as borders will have an open invitation to the undesirable scum of every nation, not to mention, you will be expected to pay and help subsidize the expense of all the illegal immigrants that come into our open orders, including but not limited to gang members, murderers, and the like. Why not? After all we rather have all these criminals come into our country than have ICE agents caging and separating children from their parents, right?

Anyways friends, I think you get the point. All-in-all, last night’s Democratic Debate, as far as I am concerned, did little else than forewarn us all one more time of the fact that we are, like the old cliché says, “a hop, skip and a jump” away form becoming a Communist State. That is what last night’s debate along with all previous debates made sure to tell us in no uncertain terms. From my own perspective, there is not much more I can do than to write these narratives and share with you, once again, something which should be very obvious to all by now, that is, the simple notion that last night’s melodramatic soap served for nothing else but to reassure us we are in a blatant war on Capitalism being waged by the Communist Democratic Party of the U.S. – that folks is my takeaway of last night’s debate. May God save us all and may God save America.