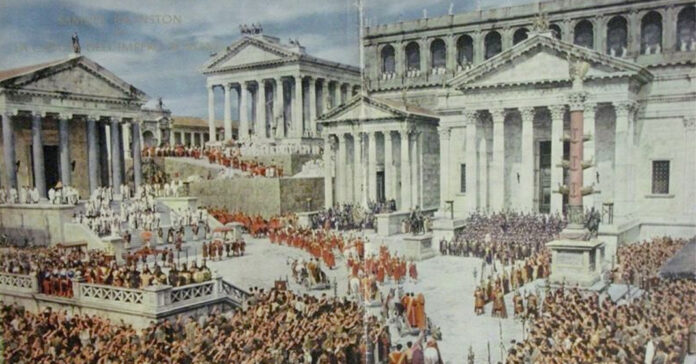 Once your leaders, sir, persuades you to believe what your intelligence declares to be absurd, beware lest you likewise sacrifice your reason in the conduct of your life. In days gone by, there were people who said to us: “You believe in incomprehensible, contradictory, and impossible things because we have commanded you to; now then, commit unjust acts because we likewise order you to do so.” Nothing could be more convincing.Certainly, anyone who has the power to make you believe absurdities has the power to make you commit injustices. If you do not use the intelligence with which God endowed your mind to resist believing impossibilities, you will not be able to use the sense of injustice that God planted in your heart to resist a command to do evil. Once a single faculty of your soul has been tyrannized, all the other faculties will submit to the same fate. This has been the cause of all the crimes that have flooded the earth. – Voltaire (adapted)

Our forefather’s ideology that culminated in a new form of governance and a Nation that became the indisputable leader of the world was influenced by the so-called “enlightened” philosophers from France, like Voltaire, and England’s Locke. Basically, the end game had to have the principles of individual freedom of speech, religion, property ownership, and separation of church of State.

A few nights ago, when talking with my nephew, who has great historical knowledge, we discussed the eventual fall of Empires as they related to our obvious decline. He mentioned a quote from Voltaire appropriate to our thoughts. When looking for the quote I found the one shown above.

The original intent was about religious oppression, but by changing just two words, in my opinion, describes to a T what we are presently facing. What better way to describe “woke”, CRT, Transgender ruse, climate change caused by humans, mainly “we the people” in the US, accept what to read, write, teach, which sports logos to use, and so forth”, than what he wrote over two centuries ago;

To believe what your intelligence declares to be absurd!

Just to chose one absurdity, close to my heart, and offensive to my knowledge, one that I warned off more than a decade ago. I am referring to the elimination of separate genders as define by our anatomy and purpose as man and woman! As absurd as this idea is, it is believed by many, and if one dares to state facts, it provokes censorship and even loss of employment.

The word is a made-up term that includes more than two dozen behaviors, some like homosexuality potentially genetic, and many other behaviors in the realm of psychological disorders and even a few borderline perversions. What many assume the term means is Transsexuality (a change of gender-defining anatomy), now called by the “politically correct crowd” of the APA Gender Dysphoria (a bothersome feeling about your gender), caused as the stats show, for another reason other than transsexual in over 99% of the cases.

Of every child that might be part of the 0.05% prevalence of a true transsexual, only observation is needed, most resolve at adolescence or after completion of sexual maturity. Definitely NOT a problem that affects society. Why I ask, this now popular malady was not a problem before?

Resuming my thoughts I will have to use again Voltaire’s words to give a reasonable explanation of what we, as a society, are going through and why it could mean the beginning of the end of the fall of our country’s world prevalence.

Once a single faculty of your soul has been tyrannized, all the other faculties will submit to the same fate.