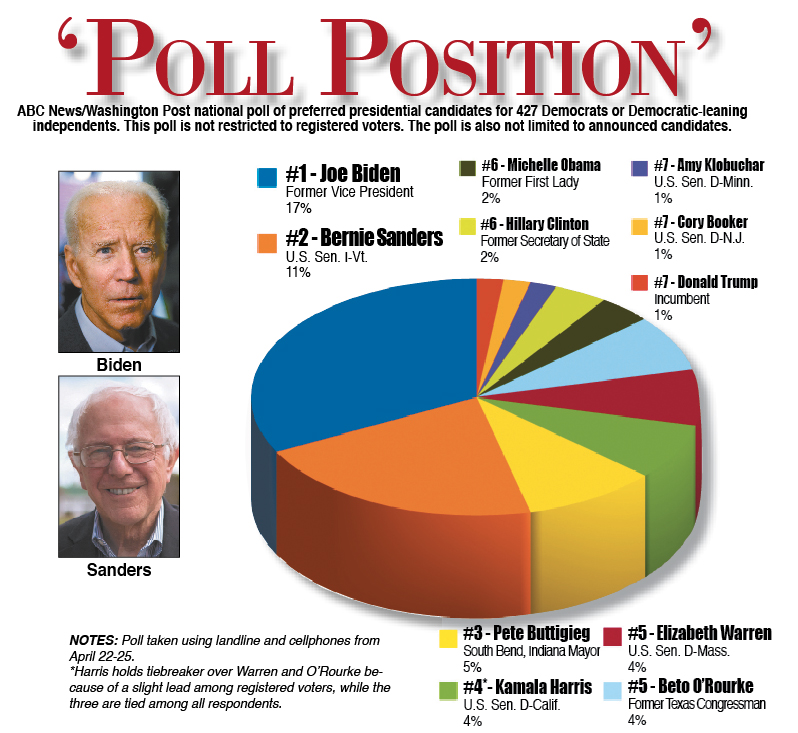 As much as I don’t trust polls, I have to say, in the democratic presidential race, the top-most reputable pollsters in the nation, including include Fox News, Quinnipiac, NBC, ABC, Politico and others have Joe Biden at the top with a 29% share, almost double than his two closest opponents, Elizabeth Warren and Bernie Sanders both in almost a dead-heat at 15% each, while the angry Kamala Harris, has virtually dropped-out of the picture slipping to a 5% share. Frankly, I am not going to bother with the rest, as most of them are at 1% or less – all but re-assured to be out of the race by the time the primaries come around. So, given the nature and reputation of the pollsters, I guess I must give some credence to the results as they all seem to coincide.

So, my narrative today is about Joe Biden. As far as I am concerned, the fact that Biden is leading the pack by such a wide margin of 15 points over Warren and Sanders, I think is a telltale sign on what to expect. Matter of fact, I think it tells us a lot more than meets the eye.

If you have been following the news, you must have noticed there is seldom a time when Joe Biden, in most all his public appearances, seems to misspeak. As I said in my last narrative, “Sleepy Joe”, as Trump calls the man, this guy [Biden] is a “gaffe and blunder” machine.

Some of his latest gaffes include him placing the assassinations of Sen. Robert F. Kennedy and Dr. Martin Luther King in the late ’70s’ missing these significant events by a decade as both Kennedy and King were assassinated in 1968. Last Friday at a fundraiser in his home state of Delaware, Biden confused Burlington, Iowa, and Burlington, Vermont.

Earlier this month, Biden said “poor kids” are just as smart as “white kids.” He has also confused former British Prime Minister Margaret Thatcher for Theresa May twice since May. In the wake of the mass shootings at Ohio and Texas, Biden also recalled meeting with the students from Parkland as vice-president – even though the 2018 massacre at a Florida high school occurred more than a year after he left the White House. In yet another rousing speech in Iowa, he made a second gaffe when he said: “we choose about truth not facts.”

So…everyone, including some prominent democrats are wondering about this Biden having the mental capabilities needed for being the president of the U.S. At 76 years-old, many seem to believe Biden is showing signs of dementia and/or mental fatigue, which would really ruin his campaign as well as any presidential aspirations.

Now, here is my take on it all. The first thing I notice is, while we all seem to agree that there is something wrong with the man, the question remains: Why is he still, gaffes and blunders and all, why is he still leading the polls? If that isn’t telling you something, I don’t know what is. The first thing this tells me is, simply, democrats do not have anyone else that can contend with Donald Trump in 2020. Just think about it this way, if you know your top contender has all kinds of mental issues as does this Biden, and, if you still give him your vote of confidence as shown in the polls, the only logic explanation is there is really no one else that gives voters any hope whatsoever. Does that make sense?

As far as I am concerned, other than the absolute lack of alternatives, there is still a lot more that this Biden’s lead in the polls is telling us, although I have yet to hear one single political expert make any mention of it.

Here is my take on it all. What exactly is it that separates Joe Biden from the rest of the pack? Well, to begin with, when I look at the contender’s field, the 23 runners-up’s, I classify them into three distinct groups and/or classes. I have Biden in a category of his own, believe it or not, as [the] most conservative within all the radical liberals running. Mind you, my use of the word “conservative” in this context is limited exclusively as compared to the other far-left candidates. Then there is this Bernie Sanders character, which is also in a category of his own – admittedly an outright communist. And, finally, I place the rest of the pack, every single one of them, into a radical Marxist-Socialist faction – not many choices if you ask me.

So…here is the deal. It is human nature, for many us, to convert “perceptions” into “realities”. It is not uncommon for everyone of us to make decisions on what we perceive, even though, most of the time, we tend to misjudge situations as our perceptions lack enough facts and information to make intelligent decisions. But, then again, that is the nature of beast.

In the case of Joe Biden, because of his age, looks, and overall demeanor, believe it or not, and, in spite of all the gaffes and blunders, the man is perceived as your quintessential old-time politician and, by default, somewhat has an aura of “conservativism” as measured and compared to all other extremists in the presidential race. The man [Biden] carries an aura of distinction; well dressed, and whether nor not we like him, he seems to be a pleasant man, albeit none of it to say that he is any better than rest – just the perception separating him. Compared to most other male candidates Biden is perceived as [the] most electable of the pack, hence his standing on the polls.

I want to take it one step further. The fact that the democratic voting universe has chosen Biden as their preferred choice, is also a telltale sign of where that universe or most democrats voters are as far as the 2020 elections. What I mean is that, the fringe media and most all radical liberals, take mainstream American’s intellect for granted. Despite what they want us to believe, all that these early polls are telling us is that as far as the Democrat’s race is concerned, a grassroots’ majority of democratic voters simply do not want or support the extreme radical views shared by most all the rest of the clowns, such as the stupid Green New Deal, welfare for all, open borders, increases in taxes; renewable energies; extreme climate changes and the rest of the Marxists far-out ignoble issues making-up the rest of the democratic candidates’ platforms.

As far as Bernie Sanders is concerned, his popularity stems, from, again, a select part of the voting universe. When I say “select”, I am referring to a base, composed mostly of young extremists. The same base that supported him in 2016. These are the young far-left communists, mostly composed of students and the alumnae classes of the last 20 years, educated in top colleges and universities of the nation, who’s radical left faculties and professors views made sure to plant the seeds of dissention such as those proposed by their old tired leader Sanders.

So, anyways, let me try to sort it all out for you, the way I see it. I see Biden prevailing and winning the democratic race – gaffes and all. I see a ticket of Biden as the presidential candidate and Elizabeth Warren as his vice-president. I see Bernie Sanders the same I did in 2016 as a hopeful with a base not quite large enough to let him come any closer than a wishful unattainable hope.

Now, as far the Biden / Warren ticket goes, let me say this, first, beware, the early polls have every single democratic contender winning over Trump by margins of 10 points and more. I say hogwash. I don’t believe any single one of these polls. Reminds me of 2016 when just prior to the elections, polls had Hillary Clinton winning 46.8% vs. Trump’s 46.3%. The way I read this whole drama is, I don’t care whether it is Biden / Warren or any other combination of clowns, there is not, in my mind any single candidate or combination of them thereof in the democrat’s party clan than can even come close to beating Trump in 2020 – simple as all that. Cheers everyone!

In summary, the main point I want to make today in this narrative is more philosophical than anything else. Again, I see Biden’s lead having paramount inferences by virtue of the fact that it says that a great majority of democrats are reservedly frightened of the far-left extremism shown by most all candidates running for president, which also tells me, voters are not as gullible and as uninformed as many presume them to be.

While there will always be an unhealthy number of democrat voters afflicted by naivetés, illiteracy, fanatism, bitterness, class-resentment, envy and all other evils, historically common to those who brand themselves as Socialists and Communists, the Biden lead, vis-à-vis, serves as a significant reminder to the rest of us, there is still hope that most Americans, are, again, diffidently hesitant to support an unhinged clan of communist ideologues, who, are for the first time in the history of the nation, openly letting the world know of their unfathomable quest to fundamentally eradicate the Constitutional Republic as willed to us by our forefathers, and transforming our great nation into a garden-variety of yet another Marxist state – the same fundamental transformation commitment made by the Manchurian Candidate Barack Obama in 2008. In summary, I see a light at the end of the tunnel. There is hope after all that democracy and capitalism will, in fact, prevail over Communism and Socialism as otherwise Biden would never be leading the polls. May God save us, and may God save America.

Is the U.S. Becoming a Communist Nation?