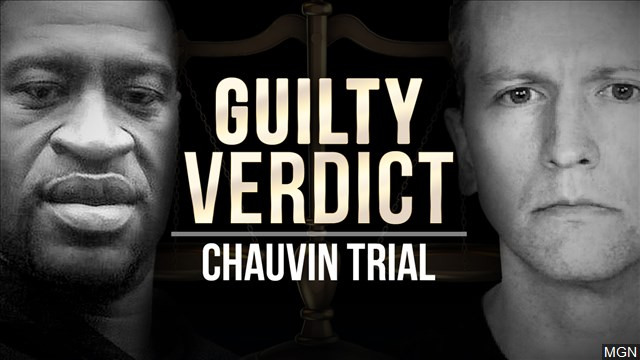 Hi there, friends, followers. O.K., so as we all know, yesterday, 35 days shy of the first anniversary of George Floyd’s death on May 25th, 2020, we finally got a verdict on the alleged murder case by Dereck Chauvin, a white police officer with the Minneapolis Police Department as the latter [Chauvin] knelt on Floyd’s neck for nine minutes and 29 seconds after he was handcuffed and lying down.

So, let me preface my comments today, by clearly letting everyone know at the outset, this narrative is not, by any means, intended to re-try the case. I will say this, I personally thought Chauvin did use unnecessary deadly force. Regardless of how I feel about the case and as one who still believes in our judicial system and the rule of law, despite the Democrats’ best efforts to dismantle, demolish, and discredit the system, I do believe justice was served. For what it is worth, I still believe that, for the most part, our system, whatever is left of it, does work. In this highly controversial and sensitive case, I will abide by the verdict reached by 12 of my fellow-Americans.

Then again, I am not here today to discuss the verdict, the sentencing, and/or any other particulars relevant to the case itself. What I want to bring up in this narrative is the significance of this trial relative to all else that surrounds it and that no one dares mention for fear of being chastised in the court of public opinion. My very first comment on this subject matter is the Floyd / Chauvin incident is at center-stage of everything that is wrong with our nation nowadays.

To be sure, the George Floyd case was not treated as an isolated incident of say a bad cop in Minneapolis, but instead was treated as an all out “racial” incident as a “whites” vs “black” issue. Just like that, the death of George Floyd, transformed him into some sort of folklore hero, a victim, a martyr for all black radical activist movements in America.

Bet you anything, anything you want to bet, there were many disappointed blacks yesterday. Let me repeat that. Bet you anything there were a great number of disappointed blacks yesterday. Yes, you heard me right. As we all listened to the news prior to the reading of the verdict, there was a universe of black activists on stand-by, ready to riot, loot and set stores on fire had Chauvin been found “not-guilty.” In other words friends, bet you anything the “guilty” verdict came as a great disappointment for many who had already made plans to create mayhem much the same way they did last summer when Floyd died.

Guarantee you many were disheartened, dismayed, and distressed blacks by what should have been welcome news in this highly publicized racial tug-of-war. To many blacks, the guilty verdict prevented them from stealing the Nike Shoes, the liquor, the T.V.s and all the other paraphernalia that they looted last summer, some including but not limited from other blacks. To the more radical in the universe of dissenting black agitators, the Black Lives Matter, Antifa and other such radicals, again, the “guilty” verdict must have left them with a void for yet another opportunity to intimidate America’s political and social landscapes – what a shame.

In my humble opinion  many in this radical cabal of blacks, don’t really give a hoot about George Floyd or his death. Matter of fact to many of these cynical activists, Floyd’s death was nothing but a convenient excuse to create chaos and mayhem in today’s highly charged racial environment.

Now, I was particularly repulsed by the way this was handled by many in the press, in the Biden administration or otherwise by many “white” weaklings – the latter a universe of wimps and cowards who, over time, have allowed for all these black Communists and terrorists to intimidate the hell out of them.

Again, I was particularly repulsed by the Joe Biden clown and his laughing hyena Vice-President, as they both continue to use incidents such as the death of George Floyd to promote racism in the United States. I beg you to read my last article “Are you a White Supremacist?” – Loved how both of them, the clown and the hyena, talk about “Systemic” Racism in the U.S. The only ‘systemic racism’ Mr. President and Ms. Vice-President is your continued incendiary referral to something that just does not exist. Had there been any systemic racism in the U.S. we would not have elected a black Communist president such as was Barack Obama to begin with.

I was more than repulsed, I was outright insulted and outraged, by the comments made by this black, mental midget and evil Congresswoman Maxine Waters while she publicly incited the terrorists to create further havoc unless the jury rendered a guilty verdict – ironically, Waters’ daring outspokenness made the judge on the Chauvin case predict her [Waters’] statement could very well pave-the-way for the case to be over-turned. Hope it is overturned just to teach this Waters snake a long overdue lesson.

And, what about Nanci Pelosi, claiming that Floyd died as a martyr on behalf of our nation’s injustices to blacks? I said it in my previous narrative and I will say it again at the expense of repeating myself. Racism today and all the related rhetorical labels surrounding it, the “white supremacy”, the “systemic racism”, the “Jim Crow” and the “Woke” syndromes, which, in the African-American vernacular refer to social and racial injustice, are all, independently and combined fabrications by the Communist Revolutionaries, by the Communist Democratic Party of the United States, who, for years now, have been diligently and conveniently promoting racism in the United States as first defined by Karl Marx in his Manifesto as: “a war between the classes.”

Bottom line, if you thought the Chauvin’s verdict would put a close to the George Floyd incident, got news for you. The Floyd incident as well as all other incidents between the police departments and blacks, notwithstanding instances where there are legitimate grounds for protests, the uprising of blacks in America is all but a convenient movement wisely and timely used by the nation’s Democratic and Communist leadership as a means of dividing the American people; by creating a chaotic state of resentment between whites and blacks; by nurturing a reverse racism backed by a corrupt president and his black vice-president. The United States racial crisis is here to stay as it is a vital and crucial issue to both the Black uprising as well as the Communist takeover of our country now in full progress. May God save us and may God save the United States of America.