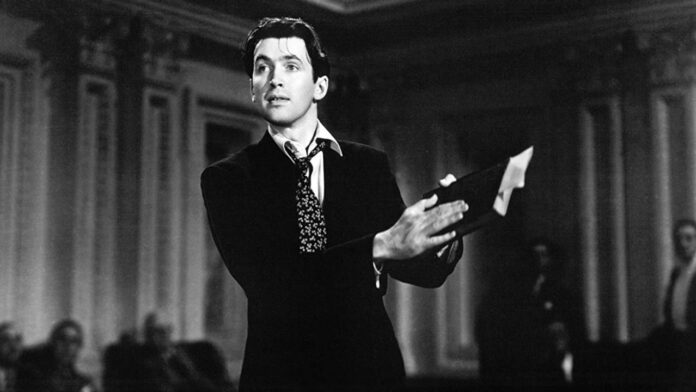 Just get up off the ground, that’s all I ask. Get up there with that lady that’s up on top of this Capitol dome, that lady that stands for liberty. Take a look at this country through her eyes if you really want to see something. And you won’t just see scenery; you’ll see the whole parade of what Man’s carved out for himself, after centuries of fighting. Fighting for something better than just jungle law, fighting so’s he can stand on his own two feet, free and decent, like he was created, no matter what his race, color, or creed. That’s what you’d see. There’s no place out there for graft, or greed, or lies, or compromise with human liberties. ~ Jefferson Smith

In 1939 a movie starring the great actor James Steward told the story of a governor that on a lark, appointed a plain-spoken citizen of a small town as a temporary Senator. This is the narrative of this film that became a classic. As I read about the dysfunction of our legislative branch, I wondered how our people and media would respond if a similar tale would be shown today. In the movie Mr. Smith finds a Washington run by a political elite, corrupted by power, and influenced by special interests.

In more than seven decades, not much has changed. But I wonder what the response would be if a Mr. Smith came to Washington today? Would he be seen as a hero, when he naively fought the establishment, filibustering, talking plainly, with the sole purpose of representing the wishes of his community thinking that it was his appointed duty? Would he be seen as a role model for our elected officials? I doubt it. In all probability he would be labeled by our mainstream media as a neophyte, obstructionist nobody, that is interrupting the normal functioning of our institutions. I can see him being called a white male supremacist and compared, as it happened recently, to a terrorist. What has changed?

In order to understand the present we have to understand our past, our Constitution, and the roots and motivation for the creation of a type of republican representative democracy that, if not perfect, became a role model for the world. Almost two centuries ago Alexis de Tocqueville was sent to the then-nascent country to write about our prison system. After much traveling and interviewing, this political expert became so impressed by what he saw that he wrote two volumes about his experience called simply Democracy in America. A must study, he made many conclusions and predictions which up to this day have relevance. De Tocqueville wrote;

In America the principle of the sovereignty of the people is neither barren nor concealed, as it is with some other nations; it is recognized by the customs and proclaimed by the laws; it spreads freely, and arrives without impediment at its most remote consequences If there is a country in the world where the doctrine of the sovereignty of the people can be fairly appreciated, where it can be studied in its application to the affairs of society, and where its dangers and its advantages may be judged, that country is assuredly America.

As he marveled about what he saw, he also made clear that this innovative form of governing could not last, because it was based on a unique quality of its citizens that in his mind would not survive, and a separation of powers whose most important deterrent would be a free and honest press. This prediction often criticized as inaccurate, seems to only fail in that it took longer than he thought. He foresaw what “affluence” in a society could become; the seed of its own destruction. He describes what it became known as the Tocqueville Effect as follows;

“Social mechanisms have paradoxes like in social frustration increases as social conditions improve”.

He wrote that this growing hatred of social privilege, as social conditions improve, leads to the state concentrating more power to itself.

So right! At present, if you believe in a small government, few taxes, representation of the people by the people you are labeled an extremist radical, as exemplified when a grass-root movement seeking just that that formed in different places and different groups and became known as the “Trump lover racist” movement and was so demonized that at present it has become an insult. By design or happenstance, as Tocqueville predicted. Our basic fabric as a society has been successfully attacked and its basic values and institutions changed for the worse. There are fewer functioning family units, Judeo-Christian beliefs are under constant attack, schools preach an extremist liberal line and only accept as appropriate the students that follow this form of indoctrination, our culture has developed into one seeking material gains, given to instant gratification and choosing dependency over individual freedom.

Without ideals, education, and beliefs we have become prey to rulers of both political parties which only differ in how much to promise and/or dole, and a defense of the basic principles of our forefathers will be quickly labeled by most of the media and the subservient public as racist, extreme, cruel and conservative as if being so was appalling. Now we look as models to countries whose form of socialist (democratic or not) systems have failed and blaming capitalism for our social problems has become popular. It is only a symbol of our “brainwashing”, that the “capitalism” that is attacked is the one which unites the powerful economic elite, with the autocratic rulers to enrich further the wealthy, impoverish more the underprivileged, and reduces the middle class which they claim to defend.

Capitalism is not cronyism; it is free markets and individual freedom to produce without the interference of the government, as long as their actions are lawful. As dependency grows, people become enslaved by the power that feeds them and a free society disappears. This is our fate, and there is no rainbow in sight.