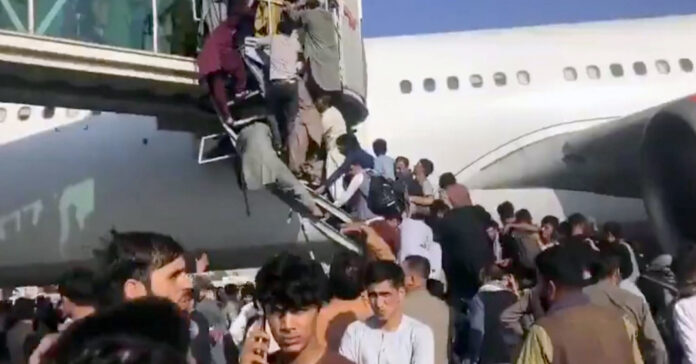 “One Democrat who spoke to Obama recalled the former president warning, ‘Don’t underestimate Joe’s ability to f*** things up,’” Politico reported. “Speaking of his own waning understanding of today’s Democratic electorate, especially in Iowa, Obama told one 2020 candidate: ‘And you know who really doesn’t have it?

Gates, secretary of defense by former President George W. Bush in 2006 and retained by former President Barack Obama until 2011, chronicling his time as defense secretary, said Biden had been “wrong on nearly every major foreign policy and national security issue over the past four decades.”

Biden went on to say that adequate forces and equipment were already in place, adding that he intended for the United States to continue to aid the Afghan government — just not with boots on the ground. One reporter asked whether a Taliban takeover was inevitable once U.S. forces cleared the region, and Biden said it was not. “No, it is not, because the Afghan troops have 300,000 well-equipped — as well-equipped as any army in the world — and an air force against something like 75,000 Taliban. It is not inevitable”

What has and is happening in Afghanistan with the rapid departure of our remaining troops and most important, discontinuing our intelligence and air support to that Nation’s army is nothing short of disgraceful. As such it will be part of our history as a dark passage of our foreign policy.

Many factors and decisions have contributed to this takeover of a country by a band of inhuman killers that will share power with our sworn enemies of Al Qaeda, Isis, and Nations like Iran, China, and Russia.

Politics aside, this tragedy happened under the mandate and instruction of our President Joe Biden. He, as noted above, has never been able to prove his reputation as a foreign policy expert.

So, it was with great interest that I watched his public appearance this afternoon. “Better late than never,” I thought hoping to hear some valid reasons for his actions and an assumption of responsibility. After all, this is the credo of every noted statesman.

Of course, as I truly expected it was not. His first tirade was to blame others including Afghan’s army and leadership, his advisers, and, as usual, former president Trump. Then he criticized the war, our prolonged stay, and late departure, not emphasizing the ordeal was launched by his Obama/Biden administration as the “real needed war” vis a vis Iraq. Then he justified his actions with the rationale of needing to return the troops back to our country.

This was baffling, as this was the same as Trump’s plan that he had just disapproved of. The only, but most important difference, was that in his hurry to outdo Trump; he hurried the withdrawal to an extent that surprised many, mostly the Afghan army and leaders. This army he now blames as cowardly has been successfully holding up against the Taliban with the US only adding air, logistical, and intelligence support.

In short, it was not the plan that failed but the execution. On this, he has only himself to blame as his attempt to justify it because of faulty intelligence or Army leaders’ advice was strongly denied and refuted by them.

In fact, they warned that a rapid withdrawal would indeed bring the chaos, we are now living. After the elimination of Osama Bin Laden, an action that Biden objected to, and the elimination of the first Taliban regime, did we need to stay? Was the neoconservative ideology of “nation-building” wrong? Were both the Iraq and/or Afghanistan wars necessary?

These are legitimate questions, but at present the recent actions backfired, should be condemned, and responsibility assumed by the ones who decided on it. Now we can only hope that the thousands of our citizens and allies that are still in situ are able to evacuate without further loss of life.