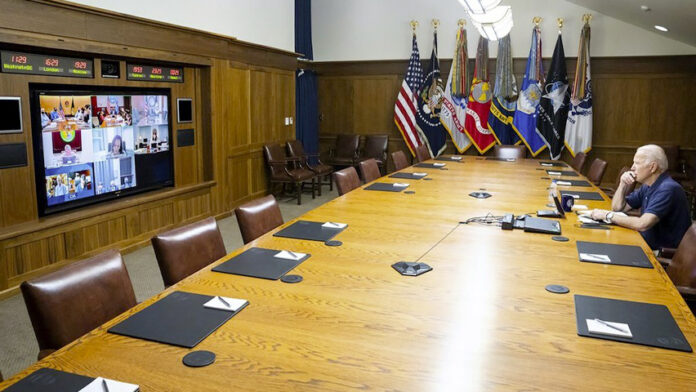 Mind the store: To take charge in someone’s absence. This phrase, dating from about 1920, originally meant literally taking over the business of a store when the owner was temporarily away. Later it was expanded to more general usage, as in:

“She’s on sabbatical leave this semester, so Professor Jones is minding the store.”

There is something very strange happening in our government’s leadership.

It has become apparent in this latest of many crises that President Biden, either by capability or design, is not fully in charge. The crucial question is: who is then?

Never before in our history, a President goes and stays on vacation in a time when American lives are at stake in a foreign country.

Decisions and potential military actions might be needed and our President has as his main duty to protect our country’s citizens. This requires a physical presence and constant meetings with top advisors. Being on vacation is NOT an option.

Even if it were, he would demand a continued physical attendance of his staff.

After a brief report to the Nation that ended with Truman’s slogan “the buck stops here”, he rapidly went back to Camp David’s vacation resort. Important to note, that in his speech before assuming responsibility, he blamed Trump, the Afghan army, military and civil leaders, the population, among others.

So basically the buck had many more stops before arriving at his office. We could think positively and say that Camp Davis has facilities equal to the White House, but the picture above tells a different and sad story. A real Commander in Chief should be physically surrounded by his top people.

His being instructed via zoom does not suffice, it just proves the point that he is not making the decisions in these extremely dangerous times. Who is then?

Not our VP, who is also AWOL, and has proven when tasked to solve problems as not up to the undertaking.

Not the Chair of the Joint Chief of Staff, Gen Mark Milley that has been totally occupied by the analysis of his “white rage”.

Not the Secretaries of State and Defense that have shown in their TV appearances incapable of delivering a clear message.

Are we being led by a consortium of billionaire executives that are looking at China as their future? In fact, presently China has surpassed the US in its military force and is close to doing so in their economy.

Also, even with the censorship of the mainstream and social media, there is clear evidence that they possess damming information on the Biden family, including Joe.

I really do not know, but it is the time for “we the people” to be wary and vigilant. 2022 elections might be our last opportunity to correct our present pathway to submission.