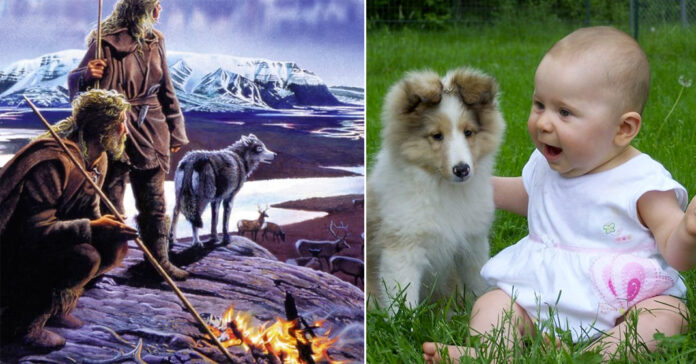 Dogs love their friends and bite their enemies, quite unlike people, who are incapable of pure love and always, have to mix love and hate.”

In these days when we are divided by race, gender, sexual orientation, politics, and many other factors it is hard to find anything to agree on. This is why, with some editing, I resurfaced and old writing in a topic that should have a common attraction (with the cat lovers permission!);

Archeologists’ have confirmed by bones found, that since the early human development a bond existed between our species and dogs.

How did this bond start?

Wolves and early humans were enemies as they fought each other in their pursuit of prey to eat. Wolves, because of their smelling ability found them earlier, while humans with their lances killed them much easier.

An early partnership of convenience started as humans followed the wolves and they in turn waited for the kill. Soon they began living closer, and then their newborn started growing together. Then the bond became strong.

In present times, our love for these animals seems boundless. We are the most developed, more intelligent, more powerful being in the animal kingdom.

Dogs are supposed to be dependent, submissive, and obedient to us. Why then, they in fact control us, wake us up, tell us that it’s time for a walk, when it’s time to sleep, and we willingly and happily oblige? Why do we love them so much?

Maybe Freud was onto something.

In their complexity humans are incapable of having pure unadulterated feelings. Needless to say it also applies to our behavior.

Loyalty, companionship, love, hate are part of the relationships in our lives because we, as dogs, are pack animals and need to exist as a group. But when analyzed, it is obvious that these feelings do not exist in eternity, change frequently in the interaction among each other, and are never absolute.

Some claim that dogs do not feel like us, and in any case are unable to express these emotions. I do not know any dog owner that will not deny that. We see in their eyes, guilt, sadness, joy, even worry and compassion. What better therapy for our ills than a lick from our pets?

We are unable to receive from any human, including our children, eternal and total loyalty. It is part of our survival needs. Dogs, on the other hand are always the unselfish friend, the one that will never abandon us or stops loving us regardless of our actions, and oblivious to our race, riches or physical handicaps.

What better example than those of handicap helpers, and/or Armed Forces dogs. Stories about these friendly animals following their masters through perils, saving them, and staying with them even after death abound.

There is the Akita that used to wait for his owner at the train station after work. When he died at his employment, the dog stayed there waiting and refusing shelter until his own demise.

Our pets not only have feelings but possess the uncanny ability to feel ours and adjust to the situation by being supportive at all times.

Some clerics claim that heaven is only for persons that have soul and purify themselves in order to belong. This is why we love our dogs so much, not only are they soulful but they exhibit by their nature what we seek, honesty and pureness.

As God created all of us, we will join our beloved little animals in heaven.