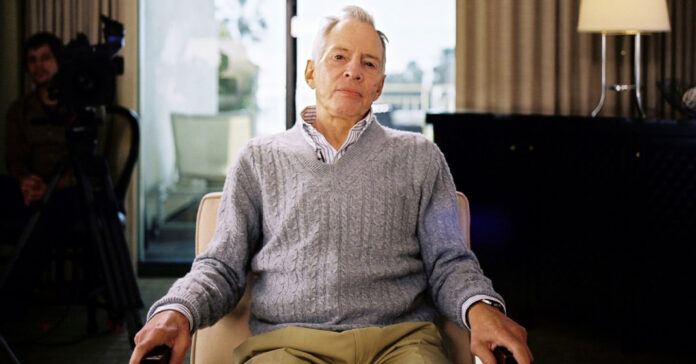 Robert Durst at trial in Los Angeles. Robert Durst, the multimillionaire real estate heir who seemed to confess to three murders in the HBO documentary The Jinx, was found guilty in Los Angeles on Friday of killing his longtime friend Susan Berman in December 2000. I wrote about this case in 2015. Finally, the correct judgment was made. Look for “The Jinx” in streaming channels.

The surface of the psychopath, however, that is, all of him that can be reached by verbal exploration and direct examination, shows up as equal to or better than normal and gives no hint at all of a disorder within.

From: The Mask of Sanity, by Hervey Cleckley

If you did not watch “The Jinx: the Life and Deaths of Robert Durst”, a six part docudrama that just ended in HBO, find out about its next showing and see it.

Andrew Jarecki and Marc Smerling related the extraordinary story of multimillionaire Robert Durst, an extremely troubled human being that was implicated in three murders, including his wife, and a neighbor that he admitted killing and dismembering, in order to toss the pieces into the ocean.

Mr. Jarecki, an Oscar winner for “All Good Things”, was able to get the interest of Mr. Durst, who agreed to do two interviews, ignoring the advice of his attorneys. As a psychiatrist, two things kept me interested in the story.

Andrew Jarecki was masterful in the way that through the interview he was able to make Mr. Durst relax, gaining some level of confidence, something extremely hard to do in a criminal psychopath.

Every mental health professional, lawyer, and law enforcement member should watch this series if only for that reason. In the end, his technique provoked a “slip” by Durst, which might turn to be his downfall.

A second item fascinating to me was the decision of Hurst’s highly paid defense in the case in Texas, to break an unwritten rule and made the accused testify. Throughout the interviews and the court proceedings, Mr. Hurst gave a vivid example of what Dr. Hervey Cleckley described in his findings on his famous book “A Mask of Sanity”.

We witnessed a deeply disturbed person, whose verbal ability was such that the jury, against overwhelming evidence, acquitted him, and to this day still see him as a victim, and not the cold blooded murderer that he seems to be.

At the end of the show, we were made aware by the news, that Mr. Durst was arrested and will face trial on the second of the three deaths that he is suspected of perpetrating. Even if criminal sociopaths suffer from a severe mental disorder, an insanity defense rarely prevails.

Psychopaths’ have no conscience, are devoid of feelings of guilt, remorse or shame for their actions, and possess no concern or love for anyone but themselves, and use these personality traits to manipulate others, being able to commit the most horrendous of crimes without assuming responsibility and/ or feeling concern, utilizing their pathological lying for their own gains.

Even so, Cleckley postulated that there was a profoundly mentally ill person behind this façade. The manual classifying mental disorders calls the condition antisocial (psychopathic), and since there is no “irresistible impulse”, and the ability to recognize “right from wrong” is not impaired, this condition is in most cases not part of a “legally insane” defense.

We will have to wait for the trial to see the outcome on this captivating story.