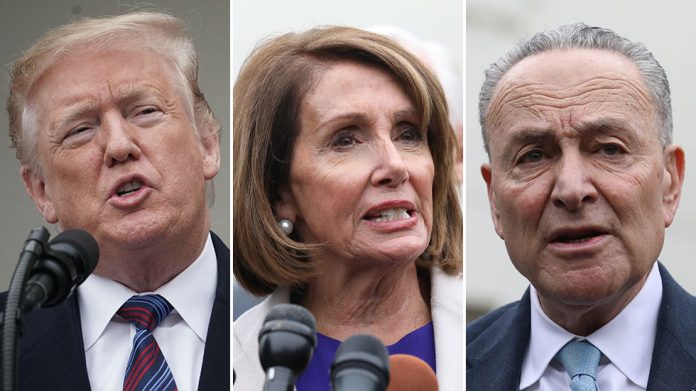 You may or may not have noticed, it’s been a while since I last wrote any articles, reason being, as far as I am concerned, it has been sort of a politically boring period, to say the least. I say boring only because all we have heard in the last two months has been about, yes, the wall, the caravan of illegal immigrants, the government shut-down and democrats’ reluctancy in giving Trump a dime for the wall construction – regardless of the collateral damage and consequences which may ensue, i.e., our present government shut-down, etc.

Like the president said last night when he addressed the nation from the Oval office, in the last two years, there have been 266,000 ICE arrests of aliens with criminal records, including those who were charged or convicted of 100,000 assaults, 30,000 sex crimes and 4,000 violent killings. Not to mention that the cost of illegal drugs coming into the country exceeds $500 billion dollars a year, and, not to mention also that the cost of upkeeping illegal immigrants is approximately $50,000 of taxpayer’s money per immigrant. Way more than the infamous $5 billion that Trump is asking for the wall and other protection means. Yet, it doesn’t seem to matter much to democrats. To them, like Chuck Schumer and Nancy Pelosi alluded to in their response to the president’s address, it’s all a manufactured crisis.

But guess what? As trite and dull as the news may appear, there is much more to it than meets the eye. There is far, far more going on than many Americans understand or care to realize. If you think about it, it’s not just the wall, it’s anything and everything that Donald Trump says and does. Many claim that it is a personal thing – a Trump-hate wave. My personal opinion on this is: I wish it was – I would be much more at ease, were that case, but it isn’t.

What I see is, no more, no less than a radical revolution that was thwarted by one man who is the epitome of “capitalism” and everything that our historical constitutional republic stands for. Think about it, Donald Trump is all about, industrialism, free-enterprise economy, free-market, laissez-fair economics and a society driven by private enterprise.

For decades, however, we have been marching to the beat of a different drum. For the last 20 years, maybe more, most all democratic platforms, have advocated for some form of “social” reform. There have been some preferred pseudonyms such as liberals, progressives and socialists, all used to characterize what was once known as “communism” – a vocable which has been conveniently and swiftly disposed of, as though the system [communism] had vanished with the crumbling of the Soviet Block in 1989 – far from it.

Well, call it you may, liberal socialists, progressives, or whatever other term you chose to use, the truth is that, aside from the name chosen, the root-ideology behind all of what you see going on, is and will always be “communism”. The liberal-democratic platforms throughout the past 20 years, all gravitate around the same old, same old, Marxist failed dogma of re-distribution of wealth – “taketh from the rich and giveth to the poor”. Well, I dare say that, after a century and a half and over 200 million deaths to its credit, communism is all but a failed economic-political philosophy – just take a closer look at Venezuela and Cuba.

As I argued in my book, which I wrote back in 2012, Barack Obama’s political agenda, was a clear display that “communism”, purportedly disguised as socialism, had finally reached an entry-level in the U.S., thus Obama’s commitment to fundamentally transforming the nation. No “ifs” or “buts” about it. I am not going to digress into the details, I dedicated a whole book to that. Suffice it say that, I am painstakingly convinced, still am, that Barack Obama, was a communist and that with his presidency, communism had finally penetrated the United States of America – to many, an unheard-of premise.

There are many Americans, still to this day, in an unremitting denial – mostly to blame for getting us to where we are today. Now, to the point I am trying to make. First, for many reasons beyond the scope of this narrative, the democratic party became the endorsers of communism / socialism in this country, albeit, with a massive following. A following, which, historically and traditionally became spell-bound by the false promises of an elite who decidedly manipulates public opinion to their favor in exchange for promises of subsidies and entitlements to come at the expense of the “bourgeoisie” [the wealthy].

My contention has always been, the masses, the majorities in all countries, are mostly composed of the poor, the needy, the less-fortunate in our societies. And, by default, the envious, the failed, the less-adept – those who want something for nothing; those who presumably want to be subsidized by government at the expense of the affluent and the well-to-do. Before you know it, the ‘Robin Hood’ ideologues, thrive on embracing this culture of wealth-redistribution as the ultimate redemption for mankind.

I can almost guarantee you that a greater part of all the ideologues in the U.S., the so-called socialists, progressives, people like this Ocasio Cortez, Bernie Sanders, and many, many others like them, are not really communists. Matter of fact, I dare say that a great many of the progressive liberals do not even know what communism is. Most, if not all of them, are romantic socialists. In their hearts-of-hearts, they truly believe in the repatriation of wealth and all the failed talking-points that communism offers.

My theory perhaps explains why African-Americans opted to become part of the rank and file of the democratic party. After hundreds of years of oppression, they look upon the democratic party as their ticket to economic freedom. Meantime, democrats continue to lure blacks to join them in a crusade of revenge against their white oppressors. And the beat goes on!

So, for God’s sake, let us take our blindfolds off once and for all. It is not about Trump, his personality, nor any such issues as the purported Russian collusion deal, the wall, or appointing Brett Kavanaugh to the Supreme Court. Not at all. The man [Trump] could be the best thing that has happened to this country since Ronald Reagan and, still, he is perceived, by many, including the fake media as: “the enemy”.

You heard this before, many times, no matter what Trump does, he is still looked upon as the closest our nation has been to a natural disaster. It doesn’t matter that our national economy is booming; nor does it matter that North Korea has put a complete halt to their nuclear missile testing agenda; or that in the international trade arena, we are regaining the respect and economic parity long forgotten by all previous presidencies – it doesn’t matter, he [Trump] is still the villain and, they, the democrats, as well as some elite hypocritical republicans would give anything to impeach the man, why not? To all of them, on November 8th, 2016, Donald Trump became a thorn in their side as this non-establishment capitalist put a grinding halt to the inevitable socialist revolution, one which the old Clinton witch was ready to pursue, as she too had been a dedicated activist since back in her days at Wellesley College as a devout follower of Saul Alinsky.

So…dear friends, I suggest you stop looking for more answers to the inexplicable. If you have naively, as I have, asked yourself questions such as: Why won’t democrats want to protect our borders? Why is our upbeat economy, our much-reduced unemployment, being taken for granted? Why isn’t there any mention about the great tax reform implemented by this president? Why was the appointment of Brett Kavanaugh to the Supreme Court so adamantly opposed to? Look no further, the answer is there, right before our very eyes. It is not Trump or about Trump. It’s about capitalism vs. communism / socialism – that’s the truth; it is about a well-organized, well subsidized, highly militant revolution whose inroads into our great nation have become evident and surfaced paving the way for of all these inexplicable questions we continue asking ourselves. Make no mistake friends, communism is here to stay. And, that, dear friends is the answer to all your questions. Again, make no mistake. If you doubt me, think again. May God bless America.