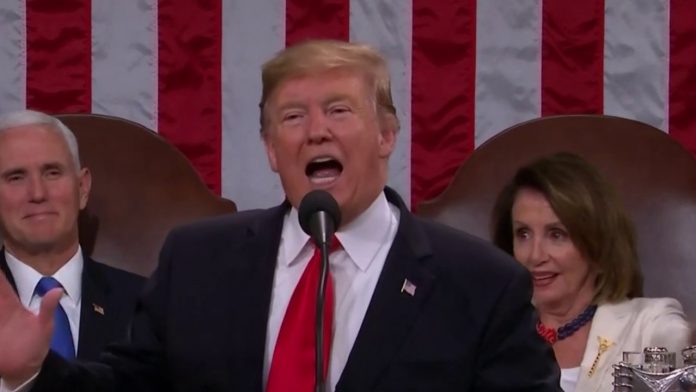 Yes, if you watched the State of the Union address, I personally think, this was an outstanding moment in the Trump presidency as well as a deciding milestone in the history of this great nation. Simply put, the president’s speech was one of the best ever since the Reagan era. It is no coincidence that a poll taken right after the speech showed Trump earning a 76% approval amongst the 45.6 million viewers who watched this breakthrough event. Should make us all very proud of our president, really.

Notwithstanding the far-ranging number of topics covered in the 82-minute speech, however, for me, the highlight of the evening, came when he [Trump] said: “tonight, we renew our resolve that America will never be a socialist country”. As far as I am concerned, everything else, bar none, despite the inherent greatness associated with each of the independent accomplishments and successes, frankly pale in comparison to this resolve.

The moment I heard him [Trump] pronounce his stance on ‘socialism’, I had goosebumps all over as a tear or two ran down my cheeks – it was, to me, a momentous and inspirational statement, to say the least. I felt a renewed sense of hope; a rehabilitated confidence in all that America stands for; and a restored sense of assurance in the future of our constitutional republic.

As expected, the president went on to enlist all the successes and accomplishments since his taking the office of president. All, mind you, highly suggestive of the strength of the union, albeit showing the latter being as strong as it ever has been in recent history. As expected, Trump went on to highlight his domestic economic triumphs such as was, the launching of an unprecedented economic boom; the creation of 5.3 million new jobs; the addition of 600,000 new manufacturing jobs; the lifting of 5 million Americans off food stamps; the low unemployment in over half-century and others, just to mention a few.

The aforementioned successes were yet a part of many others, equally memorable in the international arena, whereby, as he said, under his administration, the U.S., had “unleashed a revolution in American energy”, as the United States had become, “the number-one producer of oil and natural gas in the world.”

The list of additional feats and accomplishments enlisted by Trump in his speech were far in excess and well beyond the scope of this limited narrative. I presume that most of you watched the speech, so I think you will agree, the latter stands on its own merits as nothing short than a momentous milestone in the history of the nation, especially reassuring, at a time when the nation faces clear and present dangers posed by an overt desire by democrats to transform the nation into a full-fledged Marxist / Socialist state.

Instead of belaboring on details of the speech, which most of you, I presume, already know, I much rather divagate to other less-obvious, yet equally telling criteria on the State of the Union. I am sure, you are all very familiar with the adage: “a picture is worth 1000 words”. I think there were quite a few pictures throughout the speech all of which, individually and combined, lived-up to the maxim, as in the end, we were all left with a clear picture of how great our State-of-the-Union is today.

My first observation relative to Trump’s success in delivering his speech was his masterful wielding of the historical guests that presidents invite to State of the Union addresses. I thought Trump’s invitees, masterfully conveyed some rather powerful messages across to the viewing audience – messages which otherwise could have never reached a universe of potential voters in the 2020 elections, like these did. Messages, which bordered on the sublime if yet seductively presented to reach even the most recalcitrant opponents of this president and his administration.

The first of these awe-inspiring messages dealt with the historical patriotism which made this country the great nation it is. I thought Trump’s introduction of the three heroes in the audience, participants in the D-Day Allied Invasion and Liberation of Europe, was absolutely magnificent; his invitation of Buzz Aldrin to commemorate 50 years of the planting of the American flag on the moon, just went on to tell everyone of the greatness of our nation in the world of science and progress; his invitation of Alice Johnson and Matthew Charles, two African Americans released from prison after serving excessive jail sentences served to sent a message to the African-American community of his [Trump’s] willingness to reach-out to blacks in America, despite the democrat’s unceasing campaigns to disenfranchise blacks from the Republican party.

To reinforce his point on the building the wall he invited the daughter, grand-daughter and great grand daughter of a couple murdered by illegal immigrants, members of the MS-13 gang. Regarding this particular issue of immigration, he also invited an ICE special agent known for rescuing over 300 girls and women from sex trafficking gangs and putting 1500 sadistic traffickers behind bars.

On a subtler subject, intended to show the world the other-side of Trump, he invited 10-year-old Grace Eline, a brain-cancer patient praised for her valor, while asking the audience to support his administration in his proposed budget which asks Congress for $500 million-dollars over the next 10 years to fund critical life-saving research of children with cancer.

Of all, however, the one I thought stood as [the] most moving moment of the entire night, came as Holocaust survivor Joshua Kaufman, a Jewish prisoner at Hitler’s Dachau concentration camp, was asked to stand-up alongside with Herman Zeitchik, one of the D-Day invitees who helped liberate Kaufman and other Jewish prisoners held at Dachau. Both Kaufman and Zeitchik, stood-up together, holding hands, while a heartfelt bipartisan round of applause was given to the two heroes – to me a rather poignant moment in the evening, which served as reminder to the world of what the United States and the American people have meant to the freedoms of the world throughout history.

Vis-à-vis, amidst the sanctity and grandiosity of the moment, there was also a rather contrasting picture also being shown to the world; that was, the prevalent divisiveness that afflicts the nation. As the evening developed, the most controversial images came through our screens from none other than the wicked and despicable Speaker of the House, Nancy Pelosi, who, like all democrats, continued sending body-language signs, all throughout the evening, which openly showed her unhinged hatred for the president and all that he stands for – thank God for T.V.

In addition, as a devoted follower of kinesics – the study and interpretation of non-verbal communication; of human body-language, I could not help myself from watching all night long, the old witch’s [Pelosi] jizz-face over Trump’s shoulder as she continued making all these smirky face movements. Maybe you noticed how she [Pelosi] continued looking upon Trump’s large speech narrative sheets given her as part of the political protocols demanded by the occasion, looking upon them as though trying to read a menu in a Chinese restaurant – a déjà vous sign of the discomfort brought forth by the continued applause offered by the audience to her most hated enemy, Donald Trump.

Last but not least, there was a highly visible clan of far-left democratic women who conspired to show their poignant radicalism by dressing in white, same as Nancy, the leader of the pack. Besides the fact that I found it completely ridiculous, my very first thought was, here we go, the U.S., now has their own version of Cuba’s “Damas de Blanco” – only difference being that Cuba’s “Dames-in-White” became widely known for their noble fight against communism, while the U.S. chapter, attending the State-of-the-Union speech are ignobly known for their fight on behalf of Marxism – what a contrast!

From my perspective, the white dress-code just helped me visualize and identify at a short glance as all these far-left idiots recanting to applaud the president throughout all the times when others cheered and applauded him. Had they been dressed in normal attires, I probably could not have told them from the rest of the audience. I also could not help but notice that sitting at one of the front rows of the women-in-white, there was the former N.Y., Queen’s bartender, now democrat congresswoman Alexandria Ocasio-Cortez, recently hailed as the party’s favorite far-left poster-child.

All in all, I thought the “ladies-in-white” looked like a bunch of brain-dead robots, while publicly showing the nation how much they had to rely on each other in order to decide on whether to stand-up, stay seated and / or applaud the president when others did. Notably, throughout the entire night they would look upon each other searching for approval on what to do – that friends, is what this democratic party is made-of. I say, good for us.

In summary, I personally thought it was a great night for Republicans and even a better night for the nation. I thought the president’s speech did exactly what it called for on this solemn occasion – a true State of the Union speech. Matter of fact, I thought it did that and then some. I thought the speech went far beyond all that is presently going on in the nation. I think the speech was inspirational sparking a flame of unity, not between partisan lines, but amongst Americans from all walks of life in an all-out war against the prevalent Marxism looming in the horizon.

I thought Trump’s mention of his opposition to late-term abortion, will stand tall and transcend this moment to become a major winning issue in the Republican platform of the 2020 elections. Matter of fact, I am convinced that this State-of-the-Union, may have marked the beginnings of a re-election journey come 2020.

Most of all, however, as I said earlier in the narrative, [the] most significant issue of this State-of-the-Union for me, came in the form of Trump’s spirited announcement to the world, that the great United States of America, will not tremble in the face of socialism, thus inspiring every country-loving American to stand firm and do whatever it takes to preserve our capitalist system and our constitutional republic – much in the same tradition and spirit of those before us who sacrificed it all for the sake of the freedoms we enjoy today. May God save us, and may God save the great United States of America.