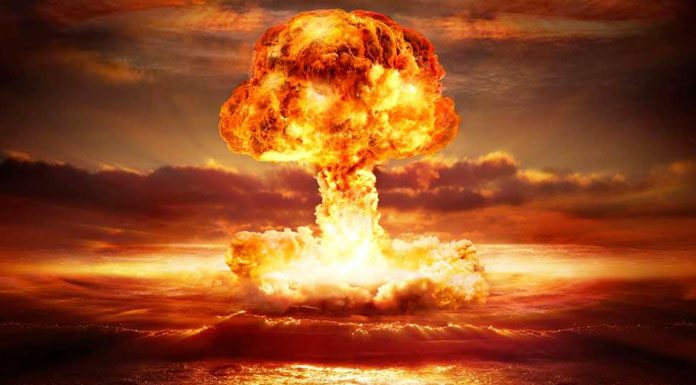 Just in case you missed it, making news Thursday, in an almost inconspicuous, subtle and elusive tone, I heard a sound-bite that sent chills up my spine – albeit, if it probably went unnoticed, ignored or disregarded by most of us. I am talking about Russian President Vladimir Putin touting and boasting of yet a new missile that will render NATO “completely useless”. Some say, this is just propaganda, but…just as well.

In an annual address to the Russian parliament, Putin said: “Russia has developed a new, nuclear-capable cruise missile with “unlimited” range that is capable of eluding air-defense systems.”

Dear reader, let me put it to you in rather straightforward, easy-to-understand simple layman’s terms. Putin’s avowal is just that Russia can “destroy” the U.S., without the U.S., even being able to defend itself.

Now, take Putin’s challenge and throw in North Korea’s Kim Jon-Un persistent threats of building nuclear war-heads and ballistic missiles, while on a continuous campaign of “dares” to the U.S., and, just like that, you figure out, it is not a matter of “if”, but a matter of “when”. Now if the concoction is not robust enough for you, how about mixing in a little radical Islamic terrorism and voilà the U.S. is surrounded by enemy-states -all of them literally capable of wiping us out of the face of the earth, before we even know it – or so says Putin anyways.

Could be just a tad too late by the time we find out whether the claims are real or not, couldn’t it?

But… wait a moment, what about our military prowess?

What about our ability to defend ourselves against the treat of enemy-states, Russia, Korea, Iran, China?

Well, I will put it to you this way folks, I am not so sure we still have a claim to be the mightiest nation in the world that we once were – not by any stretch of the imagination, thus president Trump’s overt agenda of building-up our military, given the weakened and enfeebled state in which our past Marxist president Barack Obama, left the nation.

Is there anything, I ask, this SOB did not do to undermine the wellbeing of this great nation?

So, read between the lines, all the while as our day-to-day politics has Trump and the Republican party fighting tooth and nail over innuendos such as Trump’s Russian collusion; all the while as Republicans and Democrats continue butting heads over a series of controversial memos; all the while as the world anxiously awaits for Special Counsel Robert Muller’s end of an investigation, which Marxist-liberals hope will yield Trump’s impeachment, all the while, Putin and his Russian comrades are boasting about developing weaponry that can outright wipe the U.S., out of the face of the earth, without us even knowing about it. How about that folks?

It is as though, Russians, maybe other enemy-states as well, must be thinking how totally inept we have become.

Think about it this way, if you were a part of the intel apparatus of our enemy-states, there are some incontrovertible perceptions making-up the stratagem leading to the ultimate planning in attaining world supremacy, synonymous, if you will, with the destruction of the U.S. – historically, the world’s bastion of wealth and prowess. You would be looking at a nation, which, under the auspices of a Marxist president and a Marxist Secretary of State, went ahead and sold Russia 20% of the U.S. uranium, made a deal with enemy-state of Iran and gave them $1.7 billion dollars in cash, emboldening them to continue exporting radical terrorism all over the world, bolstering them also with a clear pathway to building up their nuclear-armaments, and, in the process, making sure we derailed an ambitious law-enforcement campaign targeting drug trafficking by Iranian-backed terrorist group Hezbollah.

Yes, folks, the results of our pandering ways – a Russian missile-head, capable of reaching us undetected.

So, what is the point I am trying to make?

In light of Putin’s announcement made Thursday, my point is simple and unhindered. I would say we are on a one-way path to self-destruction. What, folks, is in store for humanity? What is in store for humans and the planet earth as we know it? Whether we want to realize it or not, we need to look ahead and begin thinking out-of-the-box, as far as the future of world is concerned.

Forget about the thoughtless “global warming”, Trump’s Russian collusion deal, DACA and immigration reform, the Wall and / or the countless other issues now a part of Washington’s political tug-of-war. I personally think, at the rate we are going, we are at the verge of extinction. Again, I think we are on a one-way path to Armageddon. I have no doubts in my mind whatsoever that we “humans” will find a way to self-destroy the species. As far as I am concerned, it is a matter of time.

Historically, we have always been at war with each other. Since time immemorial, man has always been in an unending quest to feud and kill each other. Man’s wars have been waged over all kinds of issues, i.e., territorial, religious, resources, ideological or otherwise a non-ending competition for supremacy, sovereignty, and power. It is estimated that over 1 billion people have been killed by wars throughout the history and pre-history of mankind. But, don’t need to go too far, do we? Islam today, by its very nature considers the Western civilization [us] as unclean, “other” than we must be brought into the orbit of Islam through subjugation, at best, or destruction at worst.

No matter what our good pastors, priests, rabbis, or others in the pastoral community would want us to believe inasmuch as living in peace with each other as “brothers and sisters”, this is, at best a fallacy, at worst, a wishful Shangri-La – deceitful and romantic. The irony of it all, is that by virtue of man’s breakthrough progress, evolution and development, we were able to progressively improve our ways of killing each other. As time went by, the term “weapons of mass-destruction”, became a sought-after redemption for a scientific community set-out to prove themselves in ways of outsmarting each other by ultimately finding ways of eradicating the species. If you ask me, the atomic bombings of Hiroshima and Nagasaki on August 6th and 9th, 1945 respectively, did in fact ensue the surrender of Imperial Japanese Armed forces which ended WWII, but just as well, opened-up the gates for the eventual annihilation of mankind as we know it – that simple.

In other words, one can readily conclude that man’s progress will, in the end, be its own demise. What an irony! Think about it. Over the past 100 years, our tecno-revolution has made it possible, among other things, for landing a man on the moon and connecting zillions of humans to each other using a “keyboard” and by a hand-held portable communication device known to the world as a “cellular phone”. In the medical field, man’s fight for longevity has been impressive – between 1990 and 2013, life expectancy at birth increased from 57.3 years to 64.2 years for males and from 58.2 years to 68.5 years for females. Is this an irony, or is it? We have spent zillions of dollars in medical research on how to prolong life and zillions, just as well, in finding ways to eradicate it! Wow. Does this make sense to you?

All of a sudden, when I hear Putin’s touchtone yardsticks on being able to destroy the U.S., undetected, all of a sudden, I begin to realize the anger and the hatred that prevails in the human race, still – that which incites a human being to go on a killing rampage such as the Stoneman Douglas’ High School massacre of innocent people, apparently for no reason. I take issue with the fact that there are “no apparent reasons”, as, in fact, there are. Whether we care to realize it or not, by the mere fact that we are “humans”, there is an inbred desire embedded in the DNA of the species’ to just dislike each other, even kill each other in many occult ways, such as was for Nikolas Cruz in the Florida High School, or such as we see in Putin and Kim Jong Un – no difference whatsoever. In the end, the motif is to kill each other.

In ending, I must say, my outlook for mankind is, at best, gloomy, at worst outright dismal. I see the war on Trump as a war on righteousness – a war to keep us from fighting against the-coming-of-doomsday. I look upon the issues as mere controversies in an ongoing fight of good vs. evil. When I hear of Oakland Major Libby Schaaf warning to more than 1000 illegal immigrants and criminals to flee from an impending large-scale arrest by Customs Enforcement agency, or ICE, netting the agency and arrest of only 100, I can only conclude how very messed-up our nation is. Things are bad when the nation’s politicians encourage the obstruction of justice as did the Oakland’s Major in the name of sanctity. God forbid, as some amongst the 900 of ICE’s escapees will eventually end-up hurting harmless Americans, as I am sure they will. It is fine for the establishment to continue its debate over the NRA, the use of automatic weaponry and raising the legal age to buy a weapons, etc.; it is also fine to implement programs in High Schools all over the nation, on how to train school teachers to actively participate in defense platforms designed to defend innocent students against monsters like Nikolas Cruz, but…isn’t time we also begin to find ways on how to protect us from each other at levels of mass-destruction just as well?

If only but a fraction of the time now spent politicizing issues that are truly inconsequential to the sustainability of mankind, would be spent looking for ways to protect each other from the potential extinction of mankind, we would all be better served, would we not? In ending, I can only say my prayers of hope that, by some Divine Intervention, our discernment, our brilliance, our savviness, our smarts, makes us realize that in our race for the extinction the species, there are no winners, there are only losers, and…when the time comes, we will not, as we do today, have a chance to dislike each other anymore, leaving us but with only one of two alternatives: either we make the choice to live in peace and care for each other the way it was meant to be to begin with, or otherwise we can all just say farewell to this nice planet Earth, we have disgruntledly shared for millions of years.

May God save us all!