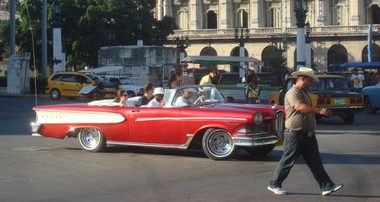 You know, with every day that goes by, I fear more and more the fact that the American people are not only looking upon socialism as a copacetic alternative to capitalism but moreover as a sanctioned substitute for the latter. I believe that the Junior Senator from Vermont, Bernie Sanders, in his candidacy for the presidency during the 2016 elections gave socialism a whole new meaning of believability amongst mainstream Americans, albeit unable to surrogate the romantic portion inherent in this failed ideology.

Sanders, a self-professed “democratic socialist” and a New Deal-era American Progressive, emphasizes economic equality as a much-needed transition in the U.S. – a subdued form of communism, if you will.

I must emphasize the fact that the political theory of socialism, as such, gave rise to communism. Karl Marx, the father of communism, believed that a utopian society must be classless and stateless, much in the way that Sanders, Alexandria Ocasio-Cortez, and other well-known modern-day communists in the U.S., advocate in their twenty-first century “socialist” platforms. Marx’s ideals promoted freeing the lower classes from poverty to give the poor a fighting chance – this, they thought, could be accomplished by government having control of all the means of production so that no one could outdo its counterparts by making more money than them – a well-intended fallacy. An ideology which, through the years proved to be a complete Shangri La – as much as it was a practical impossibility, albeit one that many romantics like this crippled-minded Sanders and mental midget Ocasio-Cortez’s and other “useful idiots” in the democratic party dare, still, embrace as the ultimate solution to man’s inure Darwinian differences – survival of the fittest of the species.

Throughout the years, since early in his career, Sanders praised the Cuban government for their reforms in education and healthcare. On April 2015 after President Obama announced that he intended to remove Cuba from the list of nations sponsoring terrorism, Sanders praised Obama for his position and for moving contentiously to re-establish diplomatic relations with the Castro animals. Fifty years of Cold War was enough – said Sanders.

Having been born in Cuba and having left this communist island over 58 years back, and having seen the pain and suffering of several generations of Cubans, each and every time I hear this imbecile old-man Sanders and all this cadre of “useful-idiots”, praise Cuba and/or suggest that socialism is a viable ideology as compared to capitalism, I feel like sending them all to Cuba, for a couple of days with all expenses paid, just so that they can get a taste of their own medicine. As much as I know that this is a wishful thinking impossibility on my part, I thought I could do the next best, which is to share publicly a short-story written by a friend of a friend, who recently traveled to Sander’s paradise while on a bicycle road trip. And he writes:

“Those of you who have been talking of going to Cuba may find this interesting. As a 77-yr. old guy who has gone to Europe, Canada, Mexico, and now Cuba for bicycle road trips, I thought you might enjoy reading my report of my bike trip to Cuba:

“On February 1st I flew to Atlanta, met some friends and we flew to Cancun, Mexico. We spent 4 days there, mostly touring the Mayan ruins of Tulum and Chichen Itza and getting ready for the next part of the adventure. Seven more people flew in and we all boarded a Mexican airline, Interjet, and flew to Havana for a week of bicycle riding in Cuba.

“Cuba, where nothing works, including the people. Unemployment is 48% and of those who do work, 8 out of every 10 work for the government. Before heading to the western part of the island, we spent a night in Havana at the Riviera Classic, the finest hotel at one time. 20 stories with 3 elevators, but only one worked. Contrary to what I found in the rest of the country, my shower only had hot water. Turn the knobs all you want, but you only got hot, scalding water.

“The stories about the old cars is quite true, but many of those cars are used to take tourists on tours of the city. $30.00 gets you 2 hours in a 1952 Cadillac convertible and you can pile in as many people in as you want. Old Chevys seem to be the most popular and a few are quite nicely restored. They all fell in the 1941 to 1957 range. I saw nothing newer than a 57. By restored, I mean they look good on the outside, but as our Cuban tour guide said, there would not be a V8 under the hood. The original had failed decades ago and with no parts to fix it, other means had to be found. Generally, that involved putting a 4-cylinder Russian made diesel in and making the necessary changes to get it to fit and mate up with an unknown transmission.

“Outside of Havana, the country is still in the 19th century. Many people walk, but equally as many use horses, both to ride and pull carts. I saw wagons pulled by oxen on the highway. We traveled by motor coach, stayed in crude motels, and ate in restaurants, all owned by the government. Staying clean was a challenge. In the public restrooms washing your hands was interesting. You need three things to wash your hands; water, soap, and a towel to dry. Well the towel was your shirt or pants, because there never were no towels. In 1/3 of the toilets there was no water, and in one case, there was a lady standing beside the sink with a bottle of water to pour over your hands. In an equal number of places, there was no soap.

“If you thought not having soap and water in the restroom was a problem, imagine not having a toilet SEAT. Yep, no toilet seat and it wasn’t just confined to public facilities. One of the rooms we stayed in had no toilet seat, which was matched by the fact there was no toilet paper. In its place, somebody had carefully torn individual sheets of toilet paper from a roll and placed them on the back of the toilet.

“Free health care and education is one of the things Castro brought with his revolution. The health care is generally limited to the bigger cities. Our guide told us that a taxi driver in Havana earned more in tips each day than a medical doctor earned in salary in one month. Oh, and the doctor can be arrested and jailed if he attempts to treat people on the side for extra money. Education is free, but the reality is that most people cannot afford to stay in school. Our tour guide was the exception. He completed college and got a master’s degree in computer technology, but can’t find a job in that field, so he conducts tours.

“We visited a tobacco farm, where we had the opportunity to purchase genuine Cuban cigars for $3.25. The farm had been in this man’s family for 3 generations, but only recently had the title been put back in his name. The government claimed it after the revolution. After harvest, the government takes 90% of the tobacco, leaving the farmer with just 10% for his “own personal use”. He chose to demonstrate how to hand-roll a cigar, then sell it to tourists. I asked our guide if all farmers lost 90% of their crop to the government. His reply, “Oh no, vegetable farmers only give up 60% of their crop”.

“The roads looked like they had been carpet-bombed with huge pot holes everywhere. Add that to the very steep hills we encountered, and it made for slow biking. While I am no speed demon, one day I averaged just 4.5 MPH as I attempted to find bits of pavement between the holes in the road. In many cases, there was no road, just dirt and when the trucks went past by, we were engulfed in a storm of dust and exhaust fumes. A few of the trucks were left over Russian military vehicles. Personal transportation in rural areas was provided by stake bodied trucks. People would stand by the side of the road and climb aboard when such a truck came by. The fare was around 8 cents and you stood packed in the bed of the truck with several dozen other people.

“Glad I went but have no desire to ever return. Cuba makes our inner cities look like paradise as their poverty is staggering. After two weeks abroad, we flew home, and I spent the night in a Hampton Inn at the Atlanta airport, before catching an early morning flight back to Seattle. Took the longest hot water shower ever after having a cheeseburger, fries and two gin & tonics for dinner. I was glad to be back.”

How about this narrative Mr. Sanders? This could very well befit our United States in the coming years should we all embrace your socialist / communist ideals. Oh…let me know if you and/or Ocasio-Cortez or any of your democratic mafia still want to visit Cuba. We will be glad to make the arrangements. God save us from you and rest of the communist mantra now permeating all crevasses of our once glorious Republic. Meantime, the rest of us, stand firm on Making America Great Again!