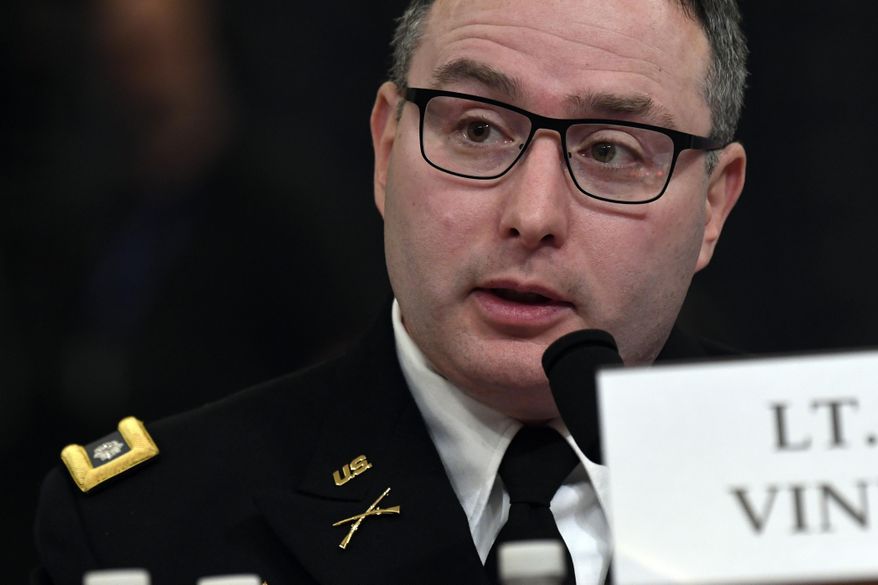 Well folks, we all remember the Ringling Brothers Barnum and Bailey circus, don’t we? Sadly, as you know, after 146 years in existence, the circus closed on May 21, 2017. Little did we know then that in 2019, a mere two years after-the-fact, the circus would come back, albeit stronger than ever before – all courtesy of the Democratic Party. Matter of fact, the new version of the circus, in the form of the ongoing “impeachment hearings” is definitely giving Ringling a run for their money as far as the old label as “The Greatest Show on Earth.”

Tuesday’s impeachment matinee had two witnesses, namely Jennifer Williams, a foreign aide detailed to Vice President’s Pence office and Lt. Col Alexander Vindman, top Ukraine specialist on the National Security Council, both of whom were privy to and/or had listened-in the infamous July 25th phone call between President Trump and Ukraine’s President Volodymyr Zelensky – [the] call where President Trump is alleged to have asked President Zelensky to conduct investigations into his political opponent ex Vice-President Joe Biden and his son Hunter sitting on the Board of Directors of one Ukraine’s most corrupt companies, Burisma Holdings, where Biden’s son was allegedly paid $83K dollars per month.

The fact that both Williams and Vindman had first-hand knowledge of the Trump-Zelensky phone call turned these two into the Democrat’s bombshell stellar acts of the hearings. As far as Jennifer Williams was concerned, however, her testimony was inconsequential. Vindman, on the other hand – a whole different story.

I shall preface my comments on Vindman’s testimony by letting you all know that for the most part of my life I have been sort of an anthropological fanatic intensely drawn to human traits and behaviors, and, notwithstanding our individuality and distinctiveness, I think, for the most part, the different variations within the human species are bound by more commonalities than we care to acknowledge, allowing for fanatics like myself to go ahead and do our unscientific prototyping.

Half-hour after watching this military-dressed buffoon and first-class nerd Vindman, I could not help myself going back in time to my childhood days. Growing up as your quintessential “bad-boy”, I remembered that, back in the day, we always found ways to coalesce and form alliances so as to protect and defend ourselves from “the enemy” – our teachers and parents. Little did we know then that with age and maturity, the enemy would ironically turn into our greatest allies – the guiding lights in our lives.

Vis-à-vis, back in the day also, there were, invariably, these kids who exemplified all that was right or righteous – they represented all that parents and teachers would look for and/or expect from all of us the bad boys. These virtuoso kids took pride in snitching on us the spoiled brats. They were informants who thrived on the approval, affection and sympathy of the parents and teachers. As far as we were concerned though, these altruistic do-gooders were just thought of as ‘rats’ by the rest of us. Only reason I refer to this childhood experience is the fact that this Lt. Col. Alexander Vindman, reminded me of your quintessential rat in the aforementioned allegorical example.

Now folks, please pay careful attention to what I am going to say. Make a note of it if you will. I want to be on record as being the first one to tell you that, as far as I am concerned, I have little doubts that this Vindman rat is where this whole impeachment charade started. I have every reason to believe Vindman was, in fact, [the] leak to the infamous whistleblower. Mind you, I am not just making-up this assertion on either gut feelings or drawing from thin air – all the contrary, I am basing my presumption on a collection of notable hints all of which, point to this man as ultimate culprit in this entire Trump impeachment extravaganza. Then again, we may never know the truth, will we?

Right from the get-go, in his testimony, Vindman seemed to enjoy smearing President Trump, suggesting the latter was, in fact, guilty of a quid-pro-quo deal, when, according to Vindman, Trump had, in fact, “demanded” certain actions from Ukrainian President Zelensky for his [Trump] own political benefit. In his testimony, Vindman went as far as saying that President Trump’s transcripts of the July 25th phone call between him and Zelensky, had been, ominously altered and there were “omissions” of things that he [Vindman] had listened to in the phone call, which ironically nobody else had heard.

In his testimony also, Vindman seemed upset about the fact that all the taking points he had prepared for President Trump’s July 25th phone call with President Zelensky had been ignored by Trump. Tim Murtaugh, the communications director for the Trump campaign, tweeted that Vindman “apparently believed HE was the one who made and coordinated U.S. policy.” So, for all I know, besides all else, our little soldier here seems to have an “ego” problem, doesn’t he? Scary thought, as prototypically these psychopaths are at centerstage of controversies, yet always find ways to come through in the public eye as the blameless heroic victims of circumstances.

Tim Morrison, Vindman’s former boss, who testified later-on in the day, said: “he had serious concerns about Vindman’s judgement”. During the hearings, Rep. Jim Jordan (R-Ohio), made reference to the fact that in addition to Morrison, Dr. Fiona Hill, Vindman’s former boss also had concerns about Vindman’s judgment and went on to say, many of Vindman’s colleagues: “felt there were times when he leaked information”. In the hearings, Jordan asked Vindman: “Any idea why your colleagues have these impressions?”

My dear friends, I guess you are now beginning to see where is it that I am drawing my seemingly far-out assertions, don’t you? For the record, attacks on Vindman’s integrity were, for the most part, avoided by all, mostly because the man had earned a purple heart while being hit by an improvised explosive device in Iraq in October 2004. My take on this purple heart deal is: So, what? From my perspective Purple-Heart or no Purple-Heart, Vindman, is your quintessential elitist democrat and “Never-Trumper”, who uses his military résumé, his righteous appearance and his snitching on the president as preferred tools for climbing an ambitious political ladder of self-endowment.

Ironically, after-the-fact, on the evening of Tuesday night, the same day we heard Vindman’s testimony, Fox News, announced, the all-American war hero, had been offered a job as Ukraine’s Minister of Defense! Coincidence, right? Yes, sure.

Make a long story short, as far as I am concerned, Vindman’s testimony only served to reassure me, one more time, of the complete farce these impeachment hearings represent. It reassured me that our country could not be more divided along partisan lines, to where one side, the Democratic side, realizes they will never win the 2020 elections for the very same reasons, if not worse, that they lost the 2016 elections. The lost hope realization, comes, as expected, with an unhinged need to dispose of Donald Trump in any which way they can – a telltale sign that we are as close as we will ever be to becoming yet another third-world banana republic, where Presidents are replaced by coup d’état’s rather than by way of democratically-sanctioned elections.

The spectacle before us, is not any impeachment hearing as it has been dubbed by Democrats. What we have before us, instead, is the beginning of the end of our Constitutional Republic as Marxism and Communism find ways to dispose of a duly elected president – as it’s typically done in all authoritarian regimes that endorse and support these radical ideologies.

As I close today, I do have to admonish the fact that, notwithstanding all of Trump’s wittiness, I have to blame some of what is going on in Trump himself, as in these hearings it has become rather evident to me, that Trump has allowed for many of his enemies to stay in his administration holding keymen posts and positions, which can, at a moments’ notice turn on him [Trump], much in the same way many of the witnesses have turned so far. Ironically, some of the most adverse testimonies thus far have come from men and women, all of whom, to this day, remain employed by this administration – an issue which I find preposterous at best, inconceivable at worst.

Time permitting, I shall try in the days that follow, continue giving you my key takeaways on the sequel of this circus. Meantime, I pray to God that we, someday, somehow can look back on these hearings as all but a stepping-stone to our having a landslide victory in the forthcoming 2020 elections, all the while as Chairman Schiff, Nancy Pelosi, and all their scoundrel Democratic colleagues rot in hell, wondering where they went wrong, much in the same way that the Hillary Clinton witch wonders, to this day, what went wrong in 2016. May God save us, and may God save America the great.

Can’t See The Forest For The Trees!

Are you a White Supremacist?

Is This The President of the U.S.?

ABOUT US
The Patriot Observer is dedicated to bringing you the real story from the source, without the left-wing spin.
Contact us: contact@patriotobserver.com
FOLLOW US
© Copyright 2021 Patriot Observer. All rights reserved.