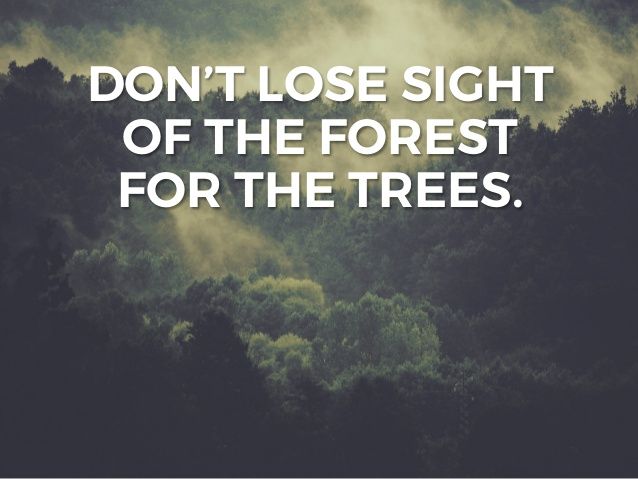 Ever heard the expression: “can’t see the forest for the trees.”? Honestly, I cannot think of any better way to describe precisely what is going on in our glorious United States today. The expression denotes someone, in my example, ‘we-the-people’, being too involved in the day-to-day intricacies of a highly convoluted nation, to where we have completely lost touch with our sense of political reality – of what is real and what is not.

We have reached a point where, whether we realize it or not, we have all been subliminally programmed to concentrate our passions in an unfathomable number of crises while being inconspicuously distracted from the greater truths – truths and/or truisms which, paradoxically, may be completely unobstructed, relatively simpler to understand, to identify, thus our inability to deal with all the perils now looming in our horizon; our most evident incapability to contest all that is wrong in our nation today, as well we should have – our blatant denial syndrome.

Could we all agree in the fact that, notwithstanding how long-winded, how complex, and how tortuous our national crises may or may not be, it seems to me that the ill-famed “racial” issue[s] are now prevalent everywhere in this country. Our nation’s racial divide appears to be at center stage, at the root-cause of all the socioeconomic and political problems facing us today. I repeat, I dare say that, if you take a closer look at all that is wrong with our nation today, it is as though everything revolves around racism and/or racial issues, does it not?

Think about it my friends. Think about Black Lives Matter, think about the Critical Race Theory [CRT]; about “Woke”, about a wave of a “White Supremacy” culture shock, now bordering a collective paranoia – a “white supremacy” endorsed by none other than President of the United States, Joe Biden and his comrades; think about “police defunding”; about a culture of racial separatism like never-before seen in this country. I dare say all of it, the whole thing, the racism, the hate, the anger, the xenophobia, the intolerance, can be readily expounded if we all look at the forest and not at the trees.

Here is my theory. So…what do I see in the forest? What I see is as simple as the fundamental doctrines of Marxism and/or Communism, having been reworked to suit the evolution from an early nineteenth century feudal version to a modern-day, high-tech, twenty-first century adaptation. The adaptation as rudimentary as that the social conflict[s] at the very foundation of communism, the conflicts between the proletariat, the oppressed, and the bourgeoisie, the oppressors, were swiftly and expeditiously transmuted to accommodate historical racial disparities – our nation’s “Achilles” tendon, to wit, a dark history of black oppression which paved the way for today’s social conflicts.

In other words, Marx’s social, or class conflicts of the epoch, were suitably substituted for yet a revised and/ or a fabricated social confrontation nowadays between blacks, the presumed oppressed, and whites, the presumed oppressors – all else remaining the same – all else defined as understanding that the conflicts between the classes then, became the conflict between the races now, while the proposed objective, a transmutation to communism remained unchanged. One can readily surmise that the success in the introduction of our twenty-first century Communism in the United States was directly, unequivocally associated to a Socialist Democratic Party’s ability to manipulate racial tensions as Marx’s first proclaimed prerequisite to completing the transformation.

Again, the end-result or objective remaining unchanged. According to Marx, the social confrontations, be it from class and/or racial disparities eventually would lead to a revolution of the oppressed as the latter would emerge triumphant in a new social order emboldened by the oppressors. By today’s standards, an empowered elitist and racially mixed coalition from within the Democratic Party espousing all kinds of sociopolitical changes in a transition to communism – a renewed socioeconomic order structured upon the ideals of common ownership of the means of production, the absence of social classes, religion, money, the state, even gender – as such, communism is just a variant of socialism, albeit, not mutually exclusive as first confirmed by Karl Marx in his interchangeable use both these terms.

O.K., so let me make this all quite simple and stupid for you. So, in my time-lapse version of history, we went from an early history of black slavery to an Emancipation Proclamation in the 1800’s, to a Civil Rights revolution in the 50’s and 60’s, to an outright modern-day culture of ‘Reverse Racism’. A culture which developed and flourished over the past fifty years with the full backing from a universe of “guilt-ridden” whites, commissioned to hearten years of dormant resentment, of black bitterness and anger, as a racially mixed elitist coalition managed to channel all such passions into a well-planned social revolution agenda ultimately set to complete the transformation to Communism in our great nation.

By 2008, the coalition succeeded, successfully implanting their favorite-son, a black Communist in the persona of Barack Hussein Obama as he became President of the United States of America. The stage had been set to where, for the first time in history, America and Americans learned about a cultured transformation crusade openly, publicly, and UN-apologetically announced by Barack Hussein Obama five days before being elected President, while most Americans did not hear the message, or…better yet did not care to hear the message.

Marx’s prophecy had become a reality as he touted with the notion that socialism and communism would be built upon foundations laid by the most advanced capitalist development, thus making us, the United States of America, according to Marx, the ultimate and most idyllic platform for the development of Communism – prophetically as well, perhaps, explaining the collapse of the Soviet Union in 1991, the latter never quite meeting Marx’s litmus test of a developed capitalist society.

In any event friends, the moral of my story today – a straightforward, simple, and unadulterated account aimed at understanding the challenges we face as the radical Left in our country egregiously utilizes the race-card to complete the transformation. From this vantage point, the answers to all prevalent chaos begins to unravel to where nothing may be sensible, but it all makes sense – the pieces of the puzzle begin to fit the narrative. All of it, the looting, the riots, the unrest, are not ultimately about George Floyd’s death or even racism. The murder of Mr. Floyd and other blacks in America, regretfully, are just convenient alibis suitably used to promote violence, social unrest and bring about the much sought-after social changes inherent in the transformation to communism as first sanctioned by Karl Marx.

Lamentably, most all Marxist / Communist goals or objectives of the transformation crusade have been met, to wit, control of the schools and our educational system; control of the media; a breakdown of our most basic moral and cultural principles – a systemic effort to do away with God and religion. A concerted effort to promote promiscuity, to mystify and bewilder gender identity; a subtle crusade to undermine law and order; to do away with our Constitution, our court system and all democratic processes and institutions; an all-out campaign to destabilize capitalism; a misguided effort to open the borders and undermine our national security and, yes, an all-out attempt to subjugate us and re-program us in our accepting, adopting, and endorsing their evil ways.

Questions remain though. Is there still time? What can we do about it? Is it too late? I say no – it is never too late, but…yes, we are quickly running out of time. In the little time that we have left friends, each and every one of us, all 74,216,154 million of us who voted for Donald Trump on Tuesday, November 3rd, 2020, every single one of us, as well as does our enemy, must all stand united; we must all band together and stand up for what is right. We must speak our minds, educate our children, we must remain steadfastly firm in our determination to regain our country back. We must peacefully, yet with intractable resolve stand ready to rebuke them every step along the way. We must use our passions to wage an ideological war aimed at preserving the fundamental values bestowed upon us by our forefathers and by all who have gallantly made the ultimate sacrifice on our behalf.

Yes, black lives matter and so do white lives – all lives matter. Friends, followers, my fellow-Americans, please, let’s look at the forest and not just the trees. May God save us and may God save the United States of America!