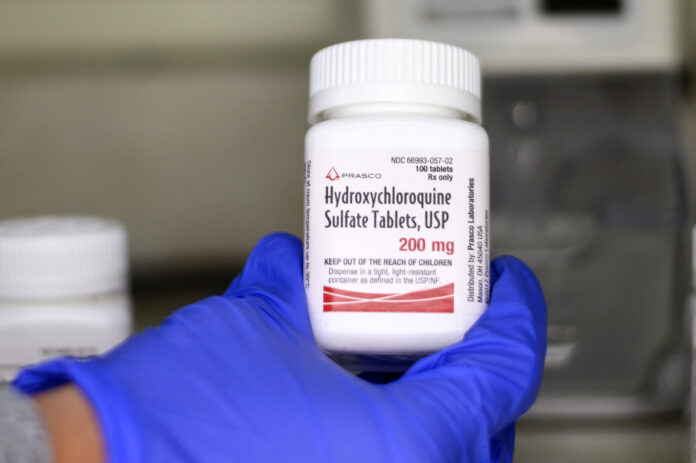 As I have said many times, the Democrats’ antipathy towards Donald Trump, simply said, has no limits. For all intents and purposes, Donald Trump could find a cure for cancer tomorrow, and they [Democrats] would still find a way to chastise him for it.

I personally think the ongoing saga with this hydroxychloroquine drug as used in the cure of the Coronavirus / COVID-19, tops it all. The thought that anyone could get on Trump’s case merely for suggesting the use of a drug to save the life of someone dying from the infestation of this virus, is, as far as I am concerned, as low as you can go – the lowest I have ever seen.

For those of you not familiar with the ongoing soap opera surrounding this sparring match between our President and “the left”, on the use of hydroxychloroquine let me brief you on it. O.K., so we all know that thus far there are no known vaccines and/or anti-viral drugs to combat the Coronavirus pandemic, plain and simple, which translates into people dying, again, plain and simple. Matter of fact, from a scientific perspective, to this day, there are no known treatments for this virus – mankind’s worse fears of this disease coming true.

Topmost epidemiologists from across the world all agree we are a good year away from developing such a vaccine, thus the open-ended battle on how to treat the unlucky ones who have contracted this plague. The only thing that we do know about the Coronavirus is the fact that it is an infectious disease-causing severe acute respiratory tract infections, which can range from mild to lethal. As of this writing, there have been more than 2.86 million cases reported across 185 countries and territories, which have resulted in the deaths of more than 200,000 people. And, mind you, the numbers may be even higher, as there is a consensus that China, the epicenter of the outbreak, is presumed to be understating their reported numbers of the pandemic. As of this writing, the United States reports almost one million cases with approximately 54,000+ deaths so far.

As the pandemic attack spread all over the globe, a panic-stricken universe of doctors, scientists and others in the healthcare community went into a frenzy on how to deal with a wave of deaths from this highly contagious pathogen. As expected, amidst the mayhem that resulted from people dying within relatively short periods of time after contracting the disease, the medical community went into a frantic search for anything and everything they could get their hands on to mitigate the outbreak. Needless to say, as well they should.
Regretfully, the search for a quick cure to the virus yielded no positive results. The closest we came was a prescription medicine, known as hydroxychloroquine, that was approved decades ago to treat malaria. Also used to treat autoimmune diseases like rheumatoid arthritis and lupus. Sometimes referred to by its brand name, Plaquenil. So far there have been some positive reports on the use of this drug to treat COVID-19, however, paired with the antibiotic azithromycin. I promise you this is as scientific as I will get on this dissertation.

My narrative today is not so much to discuss the drug hydroxychloroquine (HCQ) itself, but how the latter has taken centerstage of yet another political tug-of-war, between our president and the sick “left” of the nation. It all started, I believe, on March 21, when President Trump tweeted about hydroxychloroquine and said: “When taken together with azithromycin, have a real chance to be one of the biggest game-changers in the history of medicine.” Trump followed his tweet with touts praising the HCQ drug during his daily T.V. briefings on the pandemic. Trump’s staunch support of the drug opened up the doors for a landslide of political attacks.

Since Trump announced his support in the use of the drug, the fake news media went public accusing him of virtually everything in the book. MSNBC’s Rachel Maddow called Trump’s position “cruel and harmful, needlessly diverting and wildly irresponsible.” The New York Times referred to Trump’s optimism as “a striking example of his brazen willingness to distort and outright defy expert opinion and scientific evidence.” CNN scolded the President saying, “Trump peddles unsubstantiated hope in dark times.” The worse attack however came from MSNBC’s host Mika Brzezinski on the ‘Morning Joe’ program when she suggested that Trump’s backing of HQC was probably tied to some sort of “financial interest”. At a moment like this and in light of all that is going on, I personally found these attacks just about the lowest in the unending demeaning crusade which has been carried-on by the liberal / Communist media since the very start of Trump’s presidency.

The left’s attacks on Donald Trump relative to this hydroxychloroquine issue, have, once again, served to reinforce, add to, and bolster my boundless despise for liberal Democrats and for how down and dirty they can all go. Then again Socialists and Communists will not stop at anything, will they? I have learned how to live with the Democratic Socialists’ dirt over the past four years; over the Communists’ ill-intended tactics used to denigrate President Trump and all he stands for, but I never thought I live to see the day, when the ‘hope’ of our President to save American lives in the face of a pandemic attack could be muddied by dirty political interests; could be politicized in a show of total disregard for those whose lives are at stake amidst a pandemic attack such as the one we are now dealing with.

As far as I am concerned, the unthinkable attacks by these sorrowful clan of meandering scoundrels and outcasts warranted a fact-checking tour exclusively meant to throw light and try to find out whether or not there were any grounds, anything whatsoever, to legitimize the left’s raids. And there were not. The results of my expedition served only to prove that Trump’s stance on the hydroxychloroquine controversy responded exclusively to the man’s eternal optimism and his unparalleled ‘Americanism’ – his undeniable journey to defend and protect the United States of America and every single life in the nation. Shame on you Trump-haters.

As it turned out, Trump’s optimism relied mostly on the infamous proverb which cites “a light at the end of the tunnel” as a last-ditch effort on anything in life. Specifically, Trump relied on a couple of reports from doctors in China and France which said that hydroxychloroquine, sometimes, combined with the antibiotic azithromycin, seemed to help patients with the COVID-19 virus – both studies, however, were small and did not use the typical and historical control groups with sufficient quantities of subjects to earn the necessary scientific credence associated with the approval of a drug.

Most all scientists concur with Anthony Fauci, one of the world’s leading experts on infectious diseases who served as the director of the National Institute of Allergy and Infectious Diseases (NIAID), and who now serves as a member of the White House Coronavirus Task Force established in late January by President Trump. Fauci and a great part of the medical community have characterized the cure of the Coronavirus with hydroxychloroquine as purely “anecdotal”, as well as have discredited the Chinese and French studies with not meeting all the necessary criteria to promote the use of the drug for the cure of the COVID-19 virus.

To President Trump, notwithstanding his professional respect for Fauci and the scientific community, the mere fact that some had suggested having saved some lives of otherwise dying patients who had been literally given up on all hopes of survival, together with some self-asserting public testimonies by people who had overcome the virus after being treated with HCQ, including but not limited to Michigan’s Democratic State Rep. Karen Whitsett, a Coronavirus survivor, was enough of a building-block on which to nurture his hopes for a cure. Coincidentally, Rep. Whitsett was later censured by the State Democratic Party for her thanking the President – outright deplorable.

So…make a long story short, here is the deal. On the one hand, we have a President who decides to publicly share with the American nation his wishful desire to find a cure for the ongoing pandemic and does so by clinging to hopes built upon the success found by a few in the medical community while saving the lives of a few in the ‘dying’ universe. On the other hand, we have a filthy cadre of Trump-haters, mostly composed, as we well know, by the likes of a corrupt mainstream media, among others, whose endless, never-ending, and limitless desire to destroy our President is such that they are willing to go to ever so ‘lows’ extremes as to let people die of a pandemic disease so long as they can perpetuate their wishes to destroy the only President who, as of late, cares to “make America great again”.

In ending, I just want to say, we will never know with any certainty, will we, whether or not this hydroxychloroquine is, indeed, is that magic cure for the Coronavirus / COVID-19 pandemic, that were are so desperately looking for. We really don’t, but, if the drug has anywhere the slightest chance of improving the condition of people dying from this deadly virus; if hydroxychloroquine is of any hope whatsoever, notwithstanding how few lives it may have saved so far, we should all then look upon this drug as that “light at the end of the tunnel” which has forever served mankind’s in our unending desire to overcome; to survive and to conquer – not as a political tool to disparage, vilify and smear a President who wants to let that light shine in the dying eyes of all the hapless victims of the Coronavirus / COVID-19 pandemic. May God bless us and may God bless the United States of America.