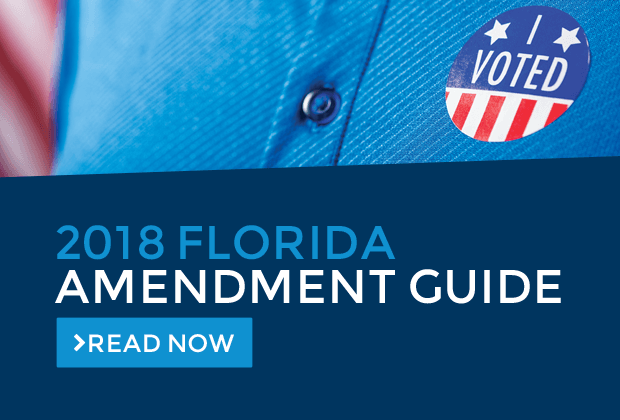 Proposes an amendment to the State Constitution to increase the homestead exemption by exempting the assessed valuation of homestead property greater than $100,000 and up to $125,000 for all levies other than school district levies. The amendment shall take effect January 1, 2019.
Summary: It adds a new homestead tax exemption for the assessed property value between $100,000 to $125,000.
My vote: No.
Comments: This amendment would benefit only 48% of properties that have a homestead exemption. The County stands to lose $12 million dollars in revenues. I find the proposal unfair to non-homestead exemption property which more likely than not would have to pay higher taxes to offset the losses.

Proposing an amendment to the State Constitution to permanently retain provisions currently in effect, which limit property tax assessment increases on specified non-homestead real property, except for school district taxes, to 10 percent each year. If approved, the amendment removes the scheduled repeal of such provisions in 2019 and shall take effect January 1, 2019.
Summary: It permanently places a 10-percent cap on the annual increase of non-homestead property tax assessments. The cap was put in place in 2008 but it’s set to expire in 2019.
My vote: Yes
Comments: This amendment is related to Amendment 1 above. Amendment 1 above, is likely to be approved only because there are many properties where owners will save in taxes as a result of the increased homestead exemption, therefore, the County would probably resort to increases in property tax to make-up for reduced revenues from the exemption. If this amendment passes it would put a limit [cap] on possible future increases in property taxes.

Amendment No. 3
Voter Control of Gambling in Florida

This amendment ensures that Florida voters shall have the exclusive right to decide whether to authorize casino gambling by requiring that in order for casino gambling to be authorized under Florida law, it must be approved by Florida voters pursuant to Article XI, Section 3 of the Florida Constitution. Affects articles X and XI. Defines casino gambling and clarifies that this amendment does not conflict with federal law regarding state/tribal compacts. The amendment’s impact on the state and local government revenues and costs, if any, cannot be determined at this time because of its unknown effect on gambling operations that have not been approved by voters through a constitutional amendment proposed by a citizens’ initiative petition process.
Summary: It gives voters, instead of the Legislature, the exclusive right to decide whether a new facility offering casino-style games (slot machines, card games) can open in the state.
My vote: Yes
Comments: On the surface, this amendment empowers us the voters to chose where we want new facilities offering casino-style games. You may want to vote “No” if you feel that voters in one part of the state would prevail in deciding where a gaming facility can open – this would probably be unbalanced as lobbying groups and other large entities would rally and gather large amounts of signatures needed for a referendum.

This amendment restores the voting rights of Floridians with felony convictions after they complete all terms of their sentence including parole or probation. The amendment would not apply to those convicted of murder or sexual offenses, who would continue to be permanently barred from voting unless the Governor and Cabinet vote to restore their voting rights on a case by case basis. The precise effect of this amendment on state and local government costs cannot be determined, but the operation of current voter registration laws, combined with an increased number of felons registering to vote, will produce higher overall costs relative to the processes in place today. The impact, if any, on state and local revenues cannot be determined. The fiscal impact of any future legislation that implements a different process cannot be reasonably determined.
Summary: It restores voting rights to former felons who served their sentence, including parole and probation, with the exception of those convicted of murder and sexual offenses.
My vote: Yes
Comments: I personally don’t see the reason why continue to punish someone in any way after they have paid their price to society. If you decide to vote “No” on this amendment you would actually be imposing an additional penalty on someone who has paid their dues.

Amendment No. 5
Supermajority Vote Required to Impose, Authorize, or Raise Taxes or Fees.

Prohibits the legislature from imposing, authorizing, or raising a state tax or fee except through legislation approved by a two-thirds vote of each house of the legislature in a bill containing no other subject. This proposal does not authorize a state tax or fee otherwise prohibited by the Constitution and does not apply to fees or taxes imposed or authorized to be imposed by a county, municipality, school board, or special district.
Summary: It requires a two-thirds vote in the Florida House and Senate — instead of a simple majority — to raise state taxes.
My vote: No
Comments: This is a tricky proposal – a play of numbers. The total number of members in the Legislature is 160, therefore, if this amendment passes it allows a minority to kill a proposal. If we need to make tax cuts in the future, this measure would make it almost impossible. If you decide to vote “Yes”, the contrary is true, it would not allow a minority to kill a proposal.

Creates Constitutional rights for victims of crime; requires courts to facilitate victims’ rights; authorizes victims to enforce their rights throughout criminal and juvenile justice processes. Requires judges and hearing officers to independently interpret statues and rules rather than deferring to government agency’s interpretation. Raises mandatory retirement age of state justices and judges from seventy to seventy-five years; deletes authorization to complete judicial term if one-half of the term has been served by retirement age.
Summary:
• Expands the scope of victims’ rights under the Florida Constitution, including victims’ rights to due process, under what’s known as Marsy’s Law;
• Raises the mandatory retirement age of Florida judges from 70 to 75;
• Prohibits state courts from deferring to an administrative agency’s interpretation of a state statute or rule.
My Vote: Yes
Comments: My primary reason for voting “Yes” was based primarily on my contention that gives “rights” of due process is good enough for me. And…that is the essence of Marsy’s Law. You may want to vote “No” if you fear that the amendment includes other “unrelated” topics such as raising the retirement age of judges and the prohibition of state courts deferring to administrative agencies

Prohibits drilling for the exploration or extraction of oil and natural gas beneath all state-owned waters between the mean high water line and the state’s outermost territorial boundaries. Adds use of vapor-generating electronic devices to current prohibition of tobacco smoking in enclosed indoor workplaces with exceptions; permits more restrictive local vapor ordinances.
Summary:
• Prohibits oil and gas drilling in offshore areas controlled by the state (it doesn’t apply to federal waters);
• Prohibits the indoor use of e-cigarettes and vaping devices, with the exception of stand-alone bars or hotel rooms where smoking is allowed.
My Vote: Yes
Comments: Even though I totally disagree in bundling proposals such as I mention in Amendment 7 above, I just happen to agree with the two bundled proposals. First, I am all for oil and gas drilling anywhere only because I see this as becoming independent from other oil producing countries. As far as the indoor use of e-cigarettes, I am all for banning them as I consider them a mere substitution of a really bad vice. Vis-à-vis, if you decide to vote “No” you would be voting for limiting our ability to become independent in oil and gas production. And, you would be accepting the use of e-cigarettes and vaping devices wherever you are.

Amendment No. 10
State and Local Government Structure and Operation

Requires legislature to retain department of veteran’s affairs. Ensures election of sheriffs, property appraisers, supervisors of elections, tax collectors, and clerks of court in all counties; removes county charters’ ability to abolish, change term, transfer duties, or eliminate election of these offices. Changes annual legislative session commencement date from March to January; removes legislature’s authorization to fix another date. Creates office of domestic security and counterterrorism within department of law enforcement.
Summary:
• Requires the Legislature to start its annual session in January instead of March during even-numbered years;
• Creates a counter-terrorism and security office within the Florida Department of Law Enforcement;
• Requires the state to have a Department of Veterans Affairs, which already exists.
• Requires that all 67 counties elect their sheriff, tax collector, elections supervisor and clerk of courts. Several Florida counties, such as Miami-Dade, now have at least one of these positions appointed.
My vote: No
Comments: Again, I find it totally absurd to bundle 4 different independent proposals under one amendment. I feel anytime this is done, someone is trying to sneak one pass me. Matter of fact, I would like to see legislation introduced banning the bundling of proposals in the electoral ballots. If you decide to vote “Yes”, you, again, would be voting on: 1) a new start date for the Legislature sessions, 2) create a new counter-terrorism within the Fla. Dept. of Law Enforcement, 3) requires the State Dept. to have a Dept. of Veteran Affairs which already exists, and 4) all Fla. Counties elect their officials.

Amendment No. 12
Lobbying and Abuse of Office by Public Officers

Expands current restriction on lobbying for compensation by former public officers; creates restrictions on lobbying for compensation by serving public officers and former justices and judges; provides exceptions; prohibits abuse of a public position by public officers and employees to obtain a personal benefit.
Summary: It expands ethics rules for public officials — elected officials, judges and government employees — and essentially bans them from lobbying the state and federal governments during their terms of office and for six years after .
My Vote: No.
Comments: I believe that “lobbying” is a part of our democracy – the right to influence others is a democratic right and I don’t believe in bans to this right. If you decide to vote “Yes”, you would be for limiting lobbying.

Phases out commercial dog racing in connection with wagering by 2020. Other gaming activities are not affected.
Summary: It ends commercial greyhound and other dog racing by 2020 while allowing tracks to continue to offer other gaming activities such as card games.
My Vote: No
Comments: I am extremely biased on this proposal. I just happen to love dog-tracks. I happen to be a dog racing fan and love when season starts. If you vote “Yes” you are actually joining supporters claiming that there is a high number of dogs’ death related.

How Can Any American be a Democrat?