Home Politics What’s Behind the Caravan? 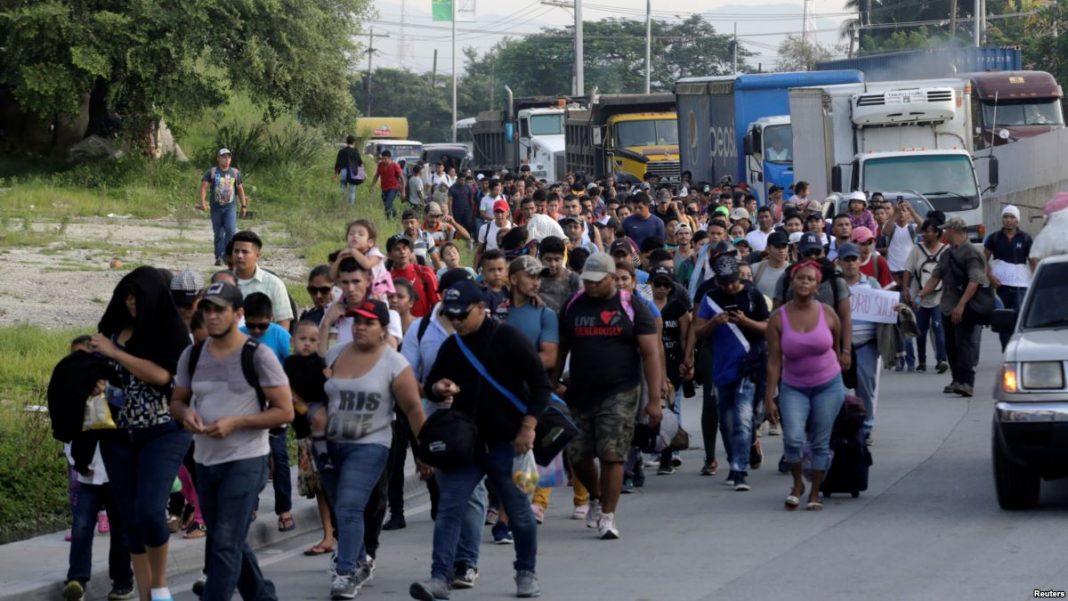 I am dedicating this narrative to all you democrats out there, especially to all you Trump-haters, who have nauseatingly politicized the immigration issue by blaming the Trump administration for their cruel handling of children being separated from their parents, etc. – followed by your ad-nauseam desire to eliminate ICE [U.S. Immigration and Custom Enforcement] agency.

But what about this Caravan? What about it? In order to give you an intelligent answer, I must first educate you on the subject as I believe many of you democrats don’t even know where the countries involved, namely Honduras and Guatemala, rest in the world map, much less have any notion of what is going on in these countries such as paving the way for this particular exodus.

Let me preface my narrative by offering you some facts, Mexican and Central American immigrants, account for approximately 71% of the total unauthorized immigrant population in the U.S. Mexico alone accounts for 11 million with another 15% from Central America. This particular Caravan started in Honduras and was later joined by some Guatemalans. Honduras is one of 7 countries making-up Central America, bordered to the west by Guatemala, to the southwest by El Salvador and to the southeast by Nicaragua.

The so-called Caravan intends to go through Guatemala into Mexico headed for the U.S. border. Before I even continue let me just say that, in my humble opinion, the Caravan is nothing, but a staged, well planned political rally conceived and designed to disrupt the U.S., Mid-Term elections. My presumption is that the Caravan has some rather economically powerful backing behind it. I would not be surprised if that SOB of George Soros is behind it all.

To be clear, as far as I am concerned, the purpose and objective of the Caravan has been carefully planned and timed to disrupt the U.S.’s Mid-Term elections; to create chaos, anarchy, disarray, and be at centerstage of the ongoing immigration controversy. They are aware that the “fake news” will give them intense coverage. And they know that, by the time they reach the U.S. border, all cameras and microphones will be upon them to show the world “how inhumanely these deprived immigrants are treated by the cruel and mean Trump administration” – just in time, mind you, to persuade voters in the U.S., to go to the polls and vote for the more merciful and humanitarian democrats!

I am reminded that the Castro dictators, used to call their android zombie followers by the name of “Tontos Utiles”, or “Useful Idiots”. I say that the democratic party leaders, Schumer, Polosi, Waters, and others are all convinced that the democrats’ party base today is nothing but a flock of “useful idiots”. As is true in all Marxist regimes, the populace of the party is completely governed by an elite who uses their overwhelming supremacy and domination while in the end ably manipulating public opinion through the use of well-groomed propaganda and deceit.

You must have noted that the “useful idiots” of the democratic coalition did come to believe that, in fact, the cruel Trump administration was in the business of “separating families” – separating children from their parents. Well friends, why don’t I start by giving you some bona-fide fact-checking reality on what is really taking place with this immigration business.

Let us begin by saying that most all countries in Central America, Honduras included of course, are really very poor countries. Their economies are mostly agricultural, and it is no coincidence that most of these them have been historically labeled as “Banana Republics”. Just so that you know, most of these countries also have only two social classes, to wit, the rich and the poor. The rich are very rich and the poor are very poor. Most of these countries have dictatorial and/or totalitarian regimes, and typically their presidents are not elected, but rather have taken over by means of military coups which end up overthrowing the previous dictator. That’s just the tradition.

As a matter of practice, dictators in these banana republics all leave office very wealthy from the money unabashedly stolen from the people – on and on. Ironically, the U.S., historically, has taken a philanthropic position with many of these countries. Given the caring and giving personality of the U.S., as the ultimate economic caretaker of the “less-fortunate”, throughout the years, we continue to indulge these Central American nations with sizable subsidies– only one problem, the help given by the U.S., never really goes to benefit the people as intended – only their elitist government officials are benefited. No secret I guess.

I shall never forget that in 1972, Central America’s Nicaragua, was hit by a 6.2-magnitude earthquake which killed more than 10,000 people and left 250,000 homeless. I also remember as right here in our backyard in Miami, there were all kinds of relief and indemnification rallies which were able to raise hundreds of millions of dollars both in money as well as goods and services earmarked for earthquake victims. At the end of the day, however, it also became well-known that most of all the relief aid never got to the victims of the earthquake, instead, it was kept by a corrupt administration – outright shameful.

The point I am trying to make for all the “useful idiots” out there is that most all the governments in Central America are corrupt, with Mexico at the top of the list. Corruption is rampage as well as is hunger amongst the lower classes. Matter of fact, starvation and misery prevail to the point where parents go as far as renting children to go out and ask for charity on the streets. I once owned a business in Mexico and would invariably find myself surrounded by children between the ages of 8 and 13 extending their hands in hopes for people to give them alms.

Again, for all of you “useful idiots” who have made the “child-separation” issue an integral part of your liberal agenda, may I remind you that many of your sorry child-victims are not even related to their presumed parents. And, may I also ask you, why would any responsible parent expose their children to the inherent risks associated with crossing a border illegally? Have you perhaps thought of blaming the parents of the so-called separated children as opposed to blaming your government? You tell that to that scumbag of Nanci Pelosi.

Instead of subsidizing many of these countries the way we have done in the past, what we really ought to do is sponsor upheavals to overthrow the corrupt elites. Just so that you understand, Honduras, the country of origin for this Caravan, has a population of 9,112,867 people. If allowed free entry into the U.S., I dare say, 9,112,866 would leave in a heart-beat. The one remaining – obviously the president – maybe even him. Ditto for every other Central American nation. Again, to be clear, all these people, including those in the Caravan are not leaving because they are oppressed by communist dictatorships. They are oppressed by their nefarious and crooked dictators. Why should this be our problem? Why not sent all back so that they can take care of business themselves. Why continue with our policy of Good Samaritans wherein after-the-fact, our repayment for our goodness comes in the form of hatred for our country and all it stands for.

Why should my tax dollars be used to subsidize other nation’s corruption? The next time I hear the lamed argument that the U.S. is cruelly separating children, I will tell whoever said so, to just go to hell and stay there. As far as this Honduran / Guatemalan Caravan is concerned, I would wait and round them all at our border and I would send them back urging them to go to arms if necessary and demand that their dictators give them a fare share of their country’s wealth so that they don’t need to come to our country and ask for us to subsidize them. I would also implement an immediate freeze of the 60+ million dollars that have been earmarked to assist Honduras this year.

Last but not least, if I were Trump, I would introduce legislation to immediately put an end to the ill-reputed “Catch and Release” program now in effect. It is well known that the “Release” portion is just a phony term as people released are presumed to come back for their day in court, yet they never show-up, thus our out-of-control immigration problem. Enough is enough, folks. Yes, we are a country of immigrants – only thing is that past immigrations have all been conducted in an orderly fashion, not in the form of mob-rule protesters willing to create havoc and mayhem as part of a Ponzi Scheme aimed at getting political asylum by expediently appealing to the useful idiots’ sympathy and sorrow. Ronal Reagan once said: “a nation that cannot control its borders is not a nation”. Our letting illegal immigrants continue to come with a free-pass, may, in fact, turn-the-tide to where, there will come a time when we, the American people, will probably have to fashion our own Caravan and look for asylum in other countries – wonder if, wherever we end-up, there will also be a “Catch and Release” program. May God save us and may God save America.

Communism In the USA – An interview with Obie Usategui of...